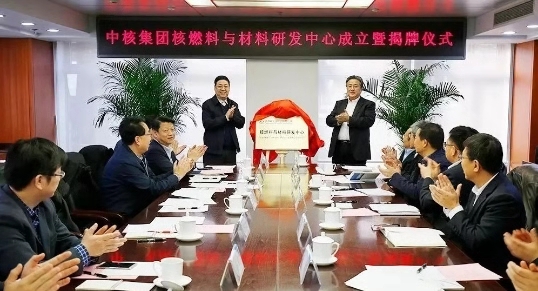 China National Nuclear Corporation (CNNC) held a ceremony to mark the founding of the Research Center for Nuclear Fuels and Materials, in Beijing, on Nov 27.

Yu Jianfeng, chairman of CNNC, attended the ceremony. He said that the founding of the new facility was a significant measure to implement the national innovation-driven development strategy and build an advanced nuclear science industrial system.

It signifies a major step for the reform and development of CNNC’s scientific innovation system, Yu said.

“Nuclear fuels and materials are fundamental to developing the nuclear industry,” he added, speaking at a meeting.

“Only when a nuclear company takes the high ground in the area can it be as qualified as an advanced nuclear science industrial system and world-class nuclear firm able to compete at a global level.”

“The aim of CNNC’s founding of the Research Center for Nuclear Fuels and Materials is to build a platform to organize the overall planning for scientific innovations in the area of nuclear fuels and materials, so as to better push forward the transformation of scientific achievements and provide support for progressing the corporation’s industrial technology,” Yu said.