U-Battery SMR moves to next stage of Canadian assessment

The Urenco-led U-Battery consortium has completed the first stage of Canadian Nuclear Laboratories' (CNL) invitation to site a first-of-a-kind small modular reactor (SMR) at the Chalk River site. It is the fourth reactor design to do so. 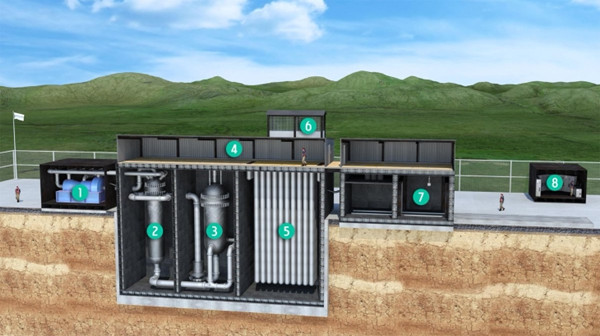 A vision of a U-Battery plant (Image: Urenco)

The U-Battery consortium has now been invited to enter the Due Diligence stage - the second of CNL's four-stage process - in which CNL will evaluate the proposed design, assess its financial viability and review the necessary national security and integrity requirements. The reactor is also progressing through the UK's Advanced Modular Reactor Programme.

U-Battery General Manager Steve Threlfall said the consortium was a "step closer" to establishing a first-of-a-kind SMR at Chalk River. "We are entering the energy sector at a critical time in Canada’s energy transformation, and U-Battery has the potential to drive significant regional economic benefits across Canada while addressing urgent climate change needs," he said.

U-Battery is a 4 MWe high-temperature gas-cooled micro nuclear reactor which will be able to produce local power and heat for a range of energy needs. The project was initiated by Urenco in 2008 and the concept design was developed by the Universities of Manchester and Dalton Institute in the UK and Technology University of Delft in the Netherlands. The consortium says the technology, which uses high-integrity TRISO fuel, aims to replace diesel power with clean, safe, and cost-effective energy for a variety of applications, including remote communities and other off-grid locations such as mining operations.

CNL aims to site an SMR at one of its locations by 2026, under a long term strategy in which it aims to become a global hub for SMR development. It launched its staged invitation process after a 2017 request for expressions of interest received responses from 19 technology developers interested in building a prototype or demonstration reactor at a CNL site.

The other proponents engaged in the invitation process are StarCore Nuclear, with a proposed 14 MWe high-temperature gas reactor; Terrestrial Energy, with its 190 MWe integral molten salt reactor, and Global First Power, with a 5 MWe high-temperature gas reactor. All have now completed the first phase of the process, while Global First Power's design has entered the third phase, which includes preliminary discussions on land arrangements, project risk management and contractual terms. The fourth and final project execution phase includes construction, testing, commissioning, operation and finally decommissioning of an SMR unit.

All the projects are subject to regulatory requirements and CNL's invitation and evaluations are independent of the Canadian Nuclear Safety Commission's (CNSC) licensing process. Global First Power submitted an application to the CNSC earlier this year to prepare a site at Chalk River, the first licence application for an SMR to be received by the Canadian regulator. An environmental assessment of the project is now under way.