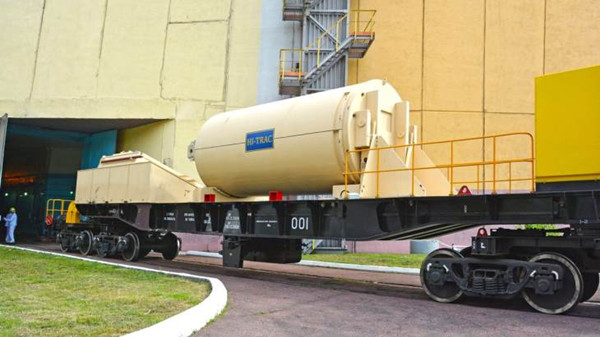 A HI-TRAC cask at the Rovno plant in Ukraine (Image: Energoatom)

The CSFSF will be a dry storage facility in which the used fuel will be stored in double-walled stainless steel canisters. The facility will mean Ukraine will no longer have to spend USD200 million each year on its arrangement with Russia to transport and reprocess used nuclear fuel.

The technology produced by the USA's Holtec, which will be tested at unit 4 in October and at units 1 and 2 in November, will be used to transport used nuclear fuel to the Central Spent Fuel Storage Facility (CSFSF) under construction at the site of the Chernobyl nuclear power plant.

Energoatom said on 8 August that the tests at unit 3, between 28 June and 5 August, demonstrated that the equipment met the requirements of the CSFSF systems and project criteria in terms of quality and safety assurance. Pavel Pavlyshyn, director general of the Rovno plant, said the functional tests had been carried out after work to reconstruct the transport corridors of the reactor units.

Pavel Sidorenko, head of maintenance at the Rovno plant, said: “We have had a positive experience with the equipment. Complex tests have enabled minor inconsistencies to be revealed with the aim to eliminate them to ensure the future safe and reliable technological operations.” Energoatom has produced a report on the tests along with recommendations for small modifications.

Energoatom and Holtec signed a contract for construction of the CSFSF in 2004, but the project was repeatedly stalled owing to changes to the political situation in Ukraine. Work on the project resumed in 2014. In January 2016, they signed an amendment to the contract to build the CSFSF at the Chernobyl nuclear power plant and supply used nuclear fuel dry cask storage systems.