Work has started on a five-year GBP1 billion (USD1.21 billion) programme to address an identified degradation risk in a small proportion of plutonium canisters stored at Sellafield in northwest England and dating from about 50 years ago. The start has been announced with the opening and repackaging of one such can for the first time. 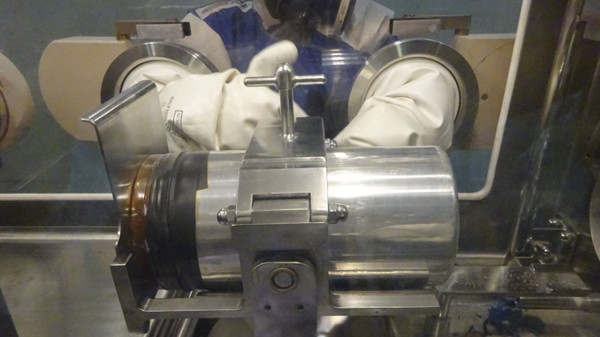 Sellafield Ltd says its long-term plan for dealing with this risk is to build a new retreatment facility, which it estimates will be operational in the mid-2020s. This will enhance the repackaging process by removing impurities in the plutonium which contribute to the degrading process. In parallel to this, it has identified a small proportion of canisters that are degrading faster than previously thought. These need to be repacked before the new facility is available.

James Millington, head of special nuclear materials at Sellafield Ltd, said: "Safely getting the first package into the new outer can represents one of the most significant risk reduction milestones we’ve delivered in recent years."

The material was originally placed in an inner can which was wrapped in a plastic casing and then placed into an 'overpack' can, but in a small proportion of the packages, the outer can has shown sign of degradation. The company describes repackaging the cans as "painstaking and highly skilled work" which requires operators to manoeuvre the package inside a sealed glovebox. The operators take the plastic-coated can out of the overpack, clean off as much plastic as possible and then reseal it in a modern and more robust outer can.