Atommash, part of the Volgodonsk branch of AEM Technology, has completed hydraulic tests of the reactor vessel of the MBIR multipurpose sodium-cooled fast neutron research reactor. MBIR is under construction at the site of the Research Institute of Atomic Reactors at Dmitrovgrad, which is in Russia's Ulyanovsk region. 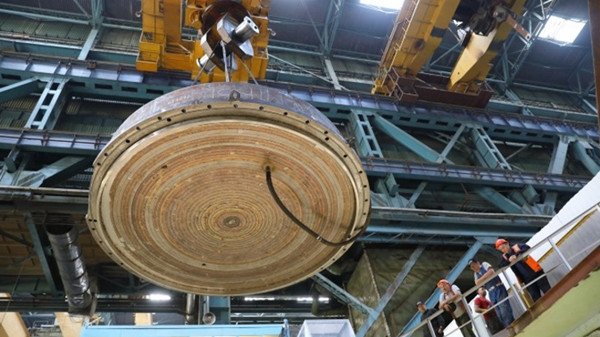 Atommash said yesterday that the procedure had involved using a 600-tonne crane to place the reactor vessel in a hydraulic test box. The reactor lid was installed and the vessel was filled with 80 tonnes of specially prepared water. During the hydraulic tests, a maximum pressure of 14 atmospheres was created in the reactor vessel, which confirmed the strength of the base metal and the quality of the welds, the company said.

Rovshan Abbasov, director of the Volgodonsk branch of AEM Technology, said: "Hydro testing is a standard procedure for us, but MBIR is a thin-walled product and has a metal thickness that is 12 times less than the usual Atommash VVER-type reactor. Working with such a thin metal is much more difficult."

The reactor vessel will now undergo vacuum tests and pneumatic tests of the control assembly.

The MBIR is a 150 MWt, sodium-cooled fast reactor and will have a design life of up to 50 years. It will be a multi-loop research reactor capable of testing lead, lead-bismuth and gas coolants, and running on MOX (mixed uranium and plutonium oxide) fuel. NIIAR intends to set up on-site closed fuel cycle facilities for the MBIR, using pyrochemical reprocessing it has developed at pilot scale.

The MBIR project is to be open to foreign collaboration, in connection with the International Atomic Energy Agency's International Project on Innovative Nuclear Reactors and Fuel Cycles (INPRO).

The MBIR will replace the BOR-60 experimental fast reactor that started operations at NIIAR's site in 1969.

AEM-Technology is a unit of AEM, the power engineering subsidiary of Russian state nuclear corporation Rosatom.