Now is the time for the world's nuclear industry to help make the case for nuclear energy in Australia, Patrick Gibbons from the Minerals Council of Australia (MCA) told World Nuclear Association Symposium 2019 in London today. 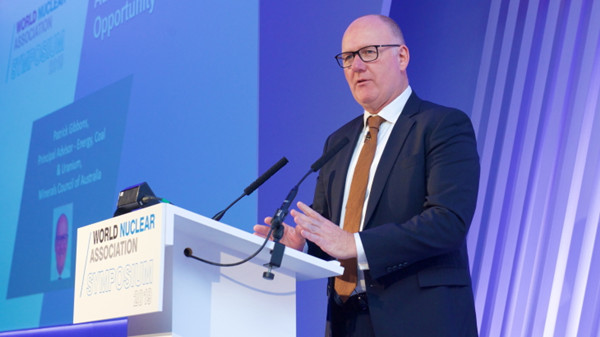 Despite having the world's largest uranium resources, nuclear energy is banned and uranium exploration and mining have been limited in Australia, Gibbons said. Nevertheless, nuclear is back on the agenda with three separate parliamentary inquiries currently taking place: a Federal Inquiry into the prerequisites for nuclear energy in Australia, which is being conducted by the House of Representatives Standing Committee on Environment and Energy; and state-based inquiries in New South Wales, on a repeal of the state ban on uranium mining and nuclear, and Victoria, which is looking to repeal its ban on uranium exploration and mining.

Australia has held inquiries on nuclear before, Gibbons said, but there is now an increasing recognition of the link between nuclear and climate change.

"The IPCC, IEA all say the same thing - if we are to keep temperature increases to 1.5 or 2 degrees, we're going to need nuclear power - and lots of it," he said. Furthermore, the coal-fired generation fleet which produces 70% of Australia's electricity is getting old, with an average age of 34 years. Much of this capacity is due to retire over the next 10-20 years. In addition, electricity prices in Australia have increased by 90% over the past decade and the country is facing the real possibility of blackouts caused by a lack of generation capacity, he said.

Australian public sentiment towards nuclear is changing, with opinion polls suggesting year-on-year increases in support. This is being reflected in discussions around nuclear, with policymakers, especially those on the political left, he said, saying Australia needs to reconsider its stance towards nuclear.

The MCA, which represents Australia's resources sector, has taken a lead role over the past five years in advocating for the repeal of the federal bans on nuclear, and will continue to do so, but there is now a broader need for the global nuclear industry to be involved, he said, adding that the industry's role in these public inquiry processes is critical.

The government has made it clear that any such policy change will require bipartisan support. There are various ways the industry can help to secure this, he said. These include addressing the "scare campaign" of nuclear opponents by "myth-busting" and also by providing "credible information" to inform a "mature debate", particularly on new nuclear technologies such as small modular reactors (SMRs). The federal inquiry has a particular focus on SMRs as there is a view that this technology will fit well with the timescale for the expected retirement of much of the country's coal-fired generation capacity, and also with an emerging energy market, where high levels of intermittent, distributed energy resources require the support of load-following baseload.

Australia operates a research reactor and already has an established regulatory framework for nuclear energy, and an educated nuclear technology workforce, he said. This means it would not need to build a nuclear technology infrastructure entirely from scratch and there is ample time to ensure it is developed for future projects.

Gibbons called for as many nuclear industry participants as possible to help make the case for nuclear by making submissions to the current inquiries "The more information the policymakers get, the easier it is for them to make a decision," he said.