Rapid growth in uranium demand will lead to a need for additional mined uranium in the period to 2040 in all scenarios given in the latest edition of World Nuclear Association's fuel report. Projections for nuclear generating capacity growth have been revised upwards for the first time in eight years, following the introduction of more favourable policies in a number of countries. 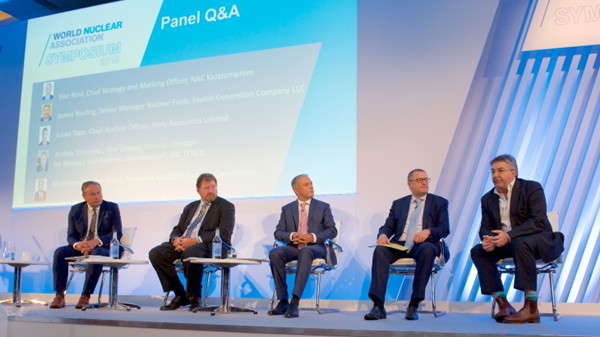 The Nuclear Fuel Report: Global Scenarios for Demand and Supply Availability 2019-2040 is the 19th in a series of reports published by World Nuclear Association and its predecessor organisation the Uranium Institute at roughly two-yearly intervals since 1975. Launched in London today at World Nuclear Association Symposium 2019, it includes three scenarios - designated Reference, Upper and Lower - covering a range of possibilities for nuclear power to 2040. It also examines the key issues that are likely to have continued relevance beyond that year.

The latest edition of the report has been fundamentally rethought and redesigned, Riaz Rizvi, chief strategy and marketing officer of NAC Kazatomprom and co-chair of the Fuel Report Working Group, told the Symposium. It is based on data gathered from questionnaires sent to World Nuclear Association members and non-members, combined with publicly available information and the judgement and experience of the members of the Association's working groups. "What is unique about this report is that it is essentially compiled by the industry … the practitioners who are actually working and living [it]," he said.

World nuclear generating capacity of 398 GWe in 2018 is expected to rise to 462 GWe by 2030 and 569 GWe in 2040 under the Reference scenario. In the Upper scenario the figures are 537 GWe by 2030 and 776 GWe in 2040. The Lower scenario sees generating capacity remain effectively unchanged throughout the forecast period, rather than displaying the downward trend seen in previous reports.

The main reasons for the positive trend in nuclear capacity projections are: the modification of France's energy policy to delay a planned reduction of nuclear power's share and allow the extension of reactor operating lifetimes to beyond 40 years; US legislative action at state level to support the continued operation of reactors at the same time as the start of a process by federal regulators to allow reactors to operate for up to 80 years; the extensive nuclear expansion plans of China and India; and improved prospects for new reactors in countries including 'newcomer countries', such as Bangladesh, Egypt and Turkey.

World Nuclear Association has revised its reactor requirements model for the new edition of the report to include a reassessment of various factors influencing demand. Fast neutron reactors are included for the first time, while a new model has been created to allow a more specific analysis of the fuel fabrication market, and capacity factor assumptions have been revised and updated.

Known world resources of uranium are "more than adequate" to satisfy reactor requirements to 2040 and beyond, although world production fell from 62,221 tU in 2016 to 53,498 tU in 2018. However, oversupply and associated low uranium prices are preventing the investment needed to convert these resources into production.

"The currently depressed uranium market has caused not only a sharp decrease in uranium exploration activities … but also the curtailment of uranium production at existing mines," the report notes.

Uranium production volumes are projected to remain fairly stable until the late 2020s under all three of the report's scenarios for uranium production, which are developed from an evaluation of current and future mine capabilities. They decrease sharply during the period 2035-2040, as a quarter of all mines listed in the model reach the end of their production lives. Global output of 66,400 tU in 2030 declines to 48,100 tU under the Reference scenario; for the Upper scenario the figures are 71,500 tU (2030) and 49,400 tU (2040). The partial return of currently idled mines to production is expected to begin in 2023 in the Reference case, 2022 in the Upper scenario and 2026 in the Lower scenario.

New supply will "categorically" be needed in the future, James Nevling, Exelon's senior manager of nuclear fuels, and co-chair of the Fuel Report Working Group, told the Symposium. "There is no question at all that new projects or the restoration of currently idled projects will have to take place," he said.

The supply methodology used in this year's report introduces a new concept of "unspecified supply" - such as idled production capacity, unspecified secondary supplies and capacity expansions. The contribution of such sources, Rizvi explained, are harder to predict than "specified" supply sources such as current capacity, planned and prospective mines and specified secondary supplies. As a gap emerges between demand and supply, a larger volume will need to come from unspecified sources.

In the near term, commercial inventories and "specified" secondary supplies will play a part in bridging the gap between supply and demand. However the role of secondary supplies will gradually diminish, falling from the 14-15% of reactor requirements they meet today to between 4% and 9% in 2040, depending on the scenario. The gap will be met from commercial inventories, the return to production of idled mines, and the development of new projects, among other sources.

"In all scenarios, the industry needs to at least double projected primary uranium production (including current, idled, under development and planned prospective projects) by 2040," the report notes. There are more than enough resources to accomplish this, "but it is essential for the market to send the signals needed to launch the development of these projects," it says.

The report also considers the supply and demand of uranium conversion, enrichment and fuel fabrication. In the uranium conversion sector - which has for the past eight years been in a situation of oversupply owing to reduced conversion requirements and the accumulation of uranium hexafluoride stockpiles - annual production is currently lower than requirements. The market has now entered a period of rebalancing as inventories are absorbed. In the medium term it is expected that currently idled conversion capacity will return to operation, while in the longer term, capacity expansion will be needed.

There is a global excess of uranium enrichment capacity, with only one of the world's major enrichment suppliers - China National Nuclear Corporation - expected to expand its capacity significantly over the forecast period as China pursues self-sufficiency targets, the report finds. Additional enrichment capacity could be needed as early as the mid-2020s under the Upper scenario but, owing to the modular nature of centrifuge technology and the construction times for nuclear reactors, such expansion can take place in a timely way and supply challenges should be avoided.

Fuel fabrication differs from other stages of the fuel cycle due to the specificity of the highly engineered and technological product, and a market which is more regional than global. Fabrication capacities are currently sufficient to cover anticipated demand, both for first cores and reloads, but supply bottlenecks could still occur for some designs, the report finds.

The report sees steady growth in nuclear capacity over the next 20 years, but more is needed to meet the World Nuclear Association's Harmony target to provide at least 25% of global electricity by 2050. This target requires the construction of more reactors than are currently projected under the Upper scenario, the report notes.

World Nuclear Association Director General Agneta Rising said, "Achieving the Harmony goal of supplying 25% of the world's electricity before 2050 will require a rapid ramp-up of new nuclear build, higher than projected in the Upper scenario, which in turn would lead to the need of greater amounts of uranium, enrichment, fuel fabrication, transport and used fuel services. Nuclear fuel cycle participants should be prepared to meet a potentially large increase in demand to meet the Harmony goal."

Nevling and Rizvi took part in a panel dicussion of the fuel report, which was moderated by Cameco President and CEO Tim Gitzel and also included Andrey Tovstenko, first deputy general director for strategy and business development at JSC Tenex, and Julian Tapp, chief nuclenr officer of Vimy Resources.

Rising asked the panel if there is enough uranium to supply the extra 1000 GWe under the Harmony target. The panel agreed there would be, but Tapp pointed to Harmony's 2050 timeframe. "Am I confident there is a lot more uranium out there than is currently in our reserve projects? Yes I am. The problem is that at the moment the market signals aren't there for people to go out and explore and build up those reserves." Uranium availability itself "won't be a factor that prevents Harmony from being achieved".

Rapid growth in uranium demand will lead to a need for additional mined uranium in the period to 2040 in all scenarios given in the latest edition of World Nuclear Association's fuel report. Projections for nuclear generating capacity growth have been revised upwards for the first time in eight years, following the introduction of more favourable policies in a number of countries.