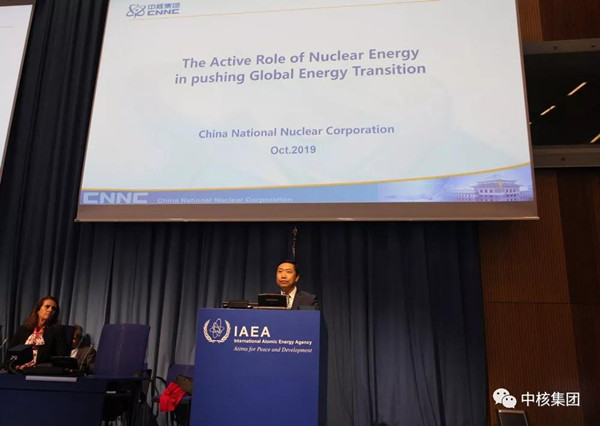 The conference brought together IAEA member countries to discuss the sustainable development of nuclear energy and climate change solutions.

In Gu’s speech, he called on the international nuclear community to strengthen their faith in nuclear development.

He noted that the international community should emphasize innovation to improve the economic efficiency of nuclear energy, and also called for more cooperation between countries.

CNNC organized a side meeting, which was attended by nearly 200 Chinese and foreign representatives, including Wang Qun, Chinese envoy to the United Nations (UN) and other international organizations in Vienna.

Attendees were briefed on the efforts made by the Chinese nuclear industrial community to combat climate change.

In 2018, China's carbon emission per unit gross domestic product (GDP) decreased 45.8 percent from the 2005 level, meeting the annual target with a reduction of 5.26 billion tons of C02 emission. In the same year, the share of non-fossil fuels in primary energy consumption reached 14.3 percent, according to Wang at the meeting.

He went on to say that smooth progress has been made on the demo projects of indigenous Chinese HTR (a high-temperature gas-cooled pebble-bed generation IV reactor) and the HPR1000 (also known as Hualong-1, a pressurized water nuclear reactor) technology, both in China and abroad.

The design and review of small modular reactors and floating reactors is also proceeding smoothly, he said.