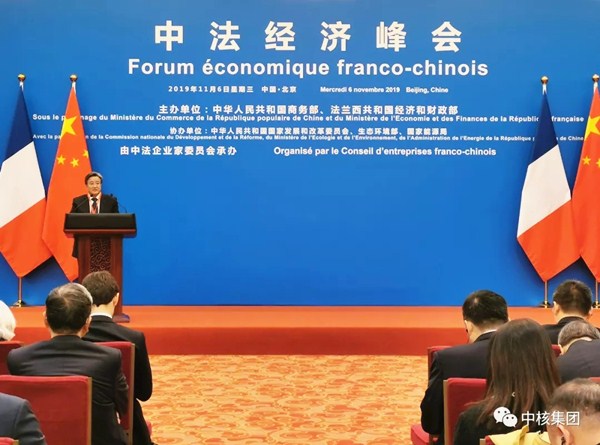 The China-France Economic Forum is held in Beijing on Nov 6, where CNNC Chairman Yu Jianfeng made a speech. [Photo/CNNC]

China National Nuclear Corporation's Chairman Yu Jianfeng called for improved international nuclear governance when he attended the China-France Economic Forum at the Great Hall of the People in Beijing on Nov 6.

Addressing the forum, Yu gave a briefing on the key progress and achievements of China's nuclear industry in recent years -- and the fruits of the 37-year cooperation between two countries in the nuclear energy sector.

Yu said that 37 years ago China and France signed an agreement on the peaceful use of nuclear energy and had since deepened their partnership, which had made a positive contribution to overall Sino-French ties.

Yu called on the governments and nuclear companies in the two countries to accelerate construction of major projects, deepen their ties in innovation, further develop a healthy international nuclear energy market and improve global nuclear governance -- so as to advance the development of the world nuclear energy cause.

Leading China's nuclear technology industry, CNNC has been engaged in innovation, safety, efficiency and the sustainable development of nuclear energy.

Officials said it has broadened international cooperation in the sector, actively participating in global nuclear governance.

CNNC has established long-term partnership with the EDF Group, the Orano Group and other nuclear companies and organizations in France.

Officials said the two countries are deepening their cooperation in the spent fuel reprocessing sector.