CNNC representatives participated in the Chinese-Foreign Enterprise Cooperation Forum hosted by the State-owned Assets Supervision and Administrative Commission of the State Council.

There they signed a contract with their counterparts at Rosatom on nuclear fuel supply for units 3 & 4 at the Xudapu nuclear power plant, located in northeastern Liaoning province.

Experts say the nuclear industry is a key sector of China-Russia cooperation.

Officials said that over the years, CNNC and Rosatom have broadened their cooperation and are moving to further improve their ties. 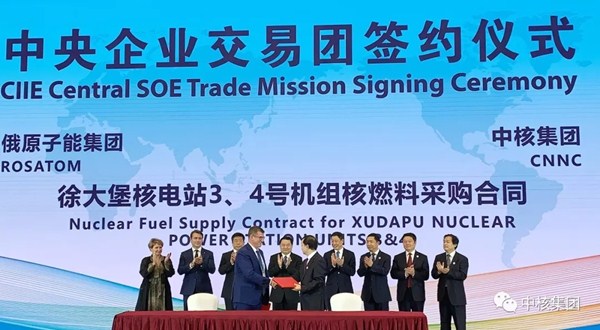 Representatives from CNNC and Rosatom sign cooperation agreements in Shanghai on Nov 6. [Photo/CNNC]