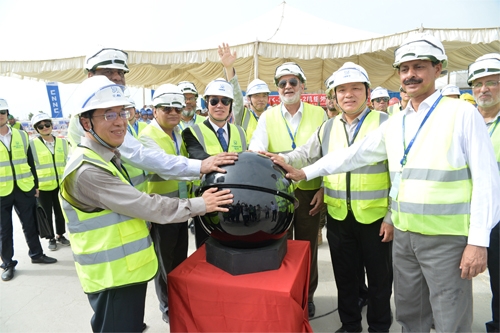 Officials announce the start of the installation of the outer containment dome of the K2 unit at Karachi nuclear power plant in Pakistan, on June 19. [Photo/CNNC]

The outer containment dome of the K2 unit at Karachi nuclear power plant in Pakistan was successfully installed on June 19, according to local news reports.

It was built by China Zhong Yuan Engineering Corporation, or CZEC, a unit of China National Nuclear Corporation, also known as CNNC.

Addressing the ceremony, Naeem, president of the Pakistan Atomic Energy Commission, thanked the constructors’ hard work over the past five years -- and spoke highly of their abilities in tackling challenges and difficulties.

When the outer containment dome of the K2 unit at the Karachi nuclear power plant in Pakistan was successfully installed, I was lucky enough to be allowed to climb up to the dome, which is 58 meters high.

The dome has a diameter of 53 meters and a weight of 366 tons. Its lifting and installation began at 5:36 am.

Without elevators, we could only climb stairs. We entered from the safeguard building of the nuclear island and then proceeded to a platform, after which we climbed a 30-meter high spiral stair, finally emerging at the site where dome was to be installed.

I could see the Arabian Sea there, which was an awe-inspiring sight.

After more than 10 minutes of fine adjustments, the dome was successfully installed. It represented the culmination of the joint efforts and achievements of more than 200 Chinese and Pakistani workers constructing the K2 project.

It was also a milestone for the K2 unit, meaning workers there could now start new work and have new achievements.