The Tianwan nuclear power plant in Lianyungang, East China’s Jiangsu province, is hailed as a model project in nuclear energy cooperation between China and Russia – but it’s also the place where a very special song of support for China amid the coronavirus epidemic has emerged.

He composed a song Chinese People Will Win in heartfelt response to the novel coronavirus pneumonia outbreak in China, to express the Russian people’s good will and blessings to the Chinese people.

Evstefeev came to work in Lianyungang in June 2018 and has since been responsible for the daily safety management of the representative office and for learning Chinese safety laws and regulations.

While working in Jiangsu, he deeply empathized the Chinese ethos in its nuclear industry and its core values of "responsibility, safety, innovation, and synergy", and shared his admiration for that spirit with his Russian colleagues.

Evstefeev says he has had a long love affair and family connection with China. His grandfather was a crew member of a Soviet army T-34 tank, who once fought with the Chinese army. Now he is very proud his work at the Tianwan nuclear power plant, which he sees as a symbol of Sino-Russian friendship.

Since the coronavirus outbreak, the Russian government and its people have expressed their support for China in many ways. 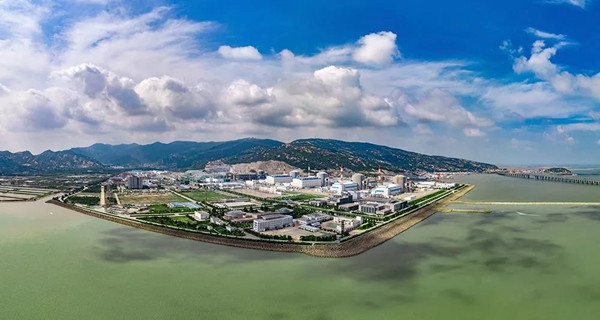 The Tianwan nuclear power plant is located in Lianyungang in Jiangsu province. [Photo/CNNC]