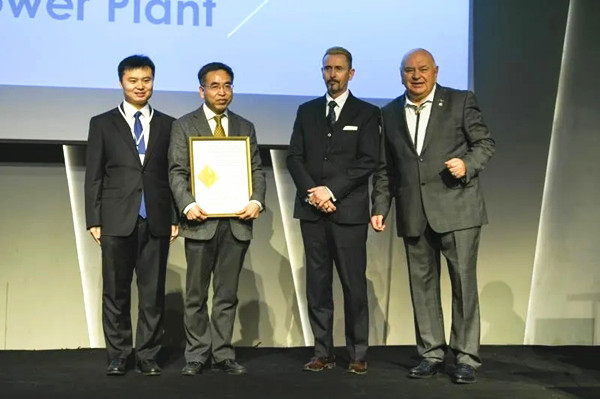 Representatives from the Embassy of China in Israel receive an award at the Quality Innovation Award in Tel Aviv in Israel. [Photo/China Association for Quality]

The 2019 Quality Innovation Award, also known as QIA, was recently announced in Tel Aviv in Israel, where a Chinese project -- R&D of Hualong One nuclear power plant steam generators -- won second prize, according to local reports.

It is a project of the Nuclear Power Institute of China, also known as the NPIC, which is a unit of China National Nuclear Corporation, or CNNC.

Due to current novel coronarivus epidemic, the team was absent from the awards ceremony and officials from the Embassy of China in Israel instead received it on their behalf.

Experts said the project demonstrates how the systematic application of quality innovation methods by the NPIC assist the research and development of the steam generators in the Chinese-designed Hualong One, or HPR 1000 nuclear reactors.

The project won the top award in the national quality innovation contest in July 2019, among more than 1,000 projects, and was recommended by the China Association for Quality for the international competition.

The HPR 1000 is a third-generation reactor design and currently steam generators have been installed in all HPR 1000 domestic and international units, according to CNNC officials.

The QIA awards was initiated in Finland in 2007 and China joined the competition in 2016. It is the most authoritative and influential international event in the field of quality innovation and is known as the “Oscars” in the field.

The NPIC project won the second award in the category of responsibility and renewability.