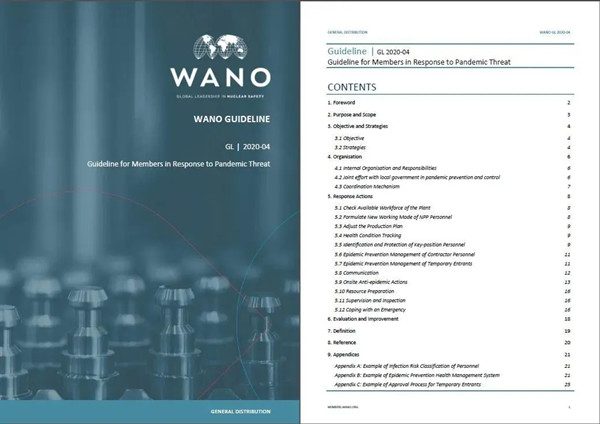 The CNNC guidelines get international recognition. They were recently published on the official website of the World Association of Nuclear Operators. [Photo/CNNC]

Invaluable guidelines put together by a unit of the China National Nuclear Corporation were recently published by the World Association of Nuclear Operators -- WANO -- according to CNNC officials.

The guidelines -- called GL 2020-04 Guideline for Members in Response to Pandemic Threat -- were compiled by Jiangsu Nuclear Power Co Ltd, a CNNC unit, and they were published on the international organization's official website.

CNNC officials said the WANO initiative is on the principles for a response by members to a pandemic, based on the recommendations of the WHO and the experiences of WANO members.

On March 24 this year, CNNC was invited to participate in an online teleconference on epidemic prevention and control work with its international counterparts.

On March 27, it was entrusted by the WANO Moscow center to compile the Guideline for Members in Response to Pandemic Threat, so as to help WANO power plant members effectively respond to the threat to the safe operations of their units from the pandemic.

Following rounds of improvements and reviews, the guideline was officially published on June 24.

Including nine parts, the guidelines systematically describe the objectives and strategies in a response to a pandemic.

It also looks at the organization and measures, as well as evaluations and improvements to a nuclear power plant's response to the threat and provides detailed good practical information in the appendices.