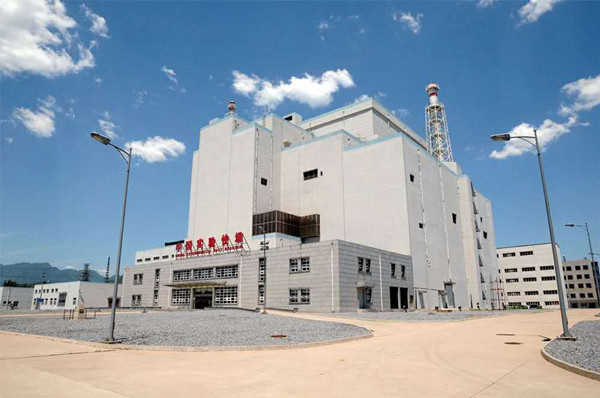 The purpose-like exterior of the building that houses the China Experimental Fast Reactor. [Photo/official WeChat account of CNNC]

The 100 percent power manual emergency shutdown test of the China Experimental Fast Reactor -- also known as the CEFR -- was successfully completed on July 31, according to the official WeChat account of China National Nuclear Corporation (CNNC).

CNNC officials said this marked the end of commissioning tests for the power test phase of the reactor and verified that its performance met the design requirements under stable conditions and expected transient operating conditions.

It also marks the successful completion of the first core cycle trial operation task of the CEFR, laying a solid foundation for the subsequent commissioning phase to be transferred to the operations phase.

Experts say a fast breeder reactor, referred to as "fast reactor", has good breeding and transmutation characteristics. The advanced fuel cycle system based on fast reactor can increase the utilization rate of uranium resources to 60 percent to 70 percent.

On June 19, the CEFR was restarted for high-power operations.

During a subsequent 40-day operations period, the team successively completed a number of tests including one on the Dynamic Test of Steam Turbine DEH Control System, a 75 percent Power Turbine Load Rejection Test and Cold Start Power-Flow Measurement Test.

Officials said that after completing the first refueling and related maintenance work, the team will restart operations to carry out planned experimental research work.

The CEFR achieved criticality for the first time in 2010 and achieved its design goal of 72 hours at full power in 2014.

After the completion of its first overhaul and related debugging tests and other work last year, 1,320 hours of low-power operations test research was carried out.