UK Energy Minister Kwasi Kwarteng said he looks forward to “a year of delivery” in 2021, following the publication of the Energy White Paper on 14 December. In an interview with Chris Lambert, director of the Westminster Energy Forum (WEF), Kwarteng explained some of the ministerial thinking behind the White Paper and provided further background on the government’s strategy for reaching net-zero by 2050. 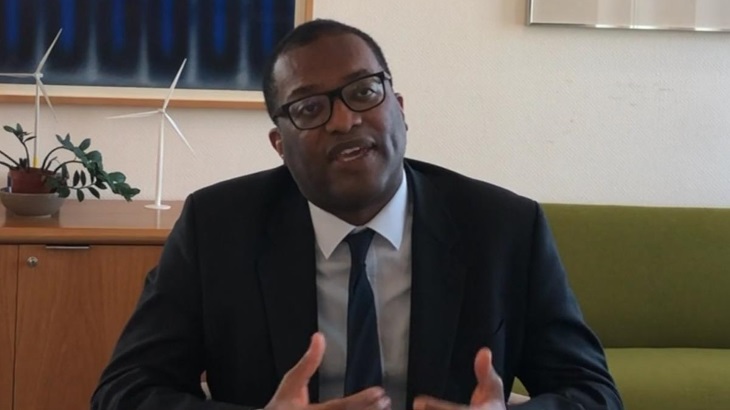 UK Energy Minister Kwasi Kwarteng during the interview with WEF

A video of the recent interview, which was made public on 8 January, signalled the launch of WEF's 2021 Work Programme, which features among other things, four climate risk and strategy events throughout the year involving a group of four COP26 Directors.

In the interview, Kwarteng explains the White Paper’s three main objectives: to creating a fair deal for consumers, transforming the energy system, and supporting a green recovery.

With a four-fold increase in clean electricity generation anticipated by 2050 - when electricity could provide more than half of final energy demand - the target of delivering 40GW of offshore wind and the expansion of other low-cost renewable technologies were discussed, with the minister highlighting the additional benefits of creating high-skilled, highly-paid green jobs.

New nuclear, including how a final investment decision would be made, were considered as well as the future potential for small modular reactor and advanced modular reactor technologies.

"The UK is leading the world’s green industrial revolution, with our ambitious targets to decarbonise our economy and create hundreds of thousands of green jobs," Kwarteng said. "As we level up the UK economy and build back greener, our Energy White Paper is a vision for the future putting fighting climate change at its heart and making certain every sector is playing their part to reduce carbon emissions to help us achieve our commitment to net zero emissions by 2050."

In its Energy White Paper, the government says it will aim to bring at least one large-scale nuclear project to the point of Final Investment Decision (FID) by the end of this Parliament, in 2024. That aim is subject to "clear value-for-money" for UK taxpayers, it added.

With the exception of Sizewell B and Hinkley Point C, which is under construction, all of the UK's existing nuclear power plants are to be closed by the end of 2030. The industry has been waiting for more than a year for the government to decide on support for the planned Sizewell C project, as well as for sites at Wylfa Newydd and Moorside.

EDF has said that its Sizewell C project will benefit from being a replica of Hinkley Point C.

Asked how that FID will be made, Kwarteng said: "Clearly the Treasury is absolutely crucial because ultimately they hold the purse-strings and will be the ultimate arbiters of 'value-for-money' for the taxpayer.

"But there are a number of other considerations that I as energy minister would be interested in being focused on. The way in which EDF engages with the local community, particularly in Sizewell C - if that's the one that gets the green light - is really important because in all of these issues there are always two sides. The onus is on the company developing to project to bring as many people as possible with them. You're not going to get a 100% of people, and I'm realistic about that, but if you can get a big majority and can show that you are benefitting the local community, that you're sensitive to their environmental concerns. I think that's a challenge they can deliver on."

On the government's announcement it would start formal negotiations with EDF, he said: "It's a commercial transaction. We have to figure out the best financial package, in terms of how it's structured, the ownership, the balance between debt and equity, whether the government - and it's something that's on the table still - puts taxpayers' money as a form of equity.

It is very difficult, he said to "see anything better than nuclear power" in terms of low-carbon and dispatchable firm power, which will be a key part of the UK's energy system in 2050.

"Nuclear power is going to be part of the mix and once you've accepted that, then you have to think about which particular projects you're going to promote. Ultimately, in the 2030s and beyond, we'll have the opportunity for small modular reactors and maybe in the 2040s for advanced modular reactors, but at the moment there is still a commitment to gigascale, and Sizewell C is well-placed in that space, but there are other projects as well that can come on stream."

The Energy White Paper also aims for 5GW of hydrogen production by 2030, and Kwarteng discussed the future of low-carbon hydrogen production, alongside the decarbonisation of gas and the development of industry net zero clusters supported by carbon capture, utilisation and storage. He also talked about the role of UK leadership, climate finance and diplomacy in the run up to COP26, to be held in Glasgow in November.

The minister also highlighted the transparency with which the Department for Business Energy and Industrial Strategy now models the energy system, as well as the intention to publish a Smart Systems Plan with Ofgem this spring, which will include a new framework for monitoring flexibility across electricity markets.