US order promotes SMRs for space exploration and defence

The US Administration has issued an Executive Order on Promoting Small Modular Reactors for National Defense and Space Exploration, which it says will further revitalise the US nuclear energy sector and reinvigorate its space exploration programme. This includes directives to demonstrate the use of microreactors on military bases and also to ensure a viable US-origin supply of high-assay low-enriched uranium (HALEU). 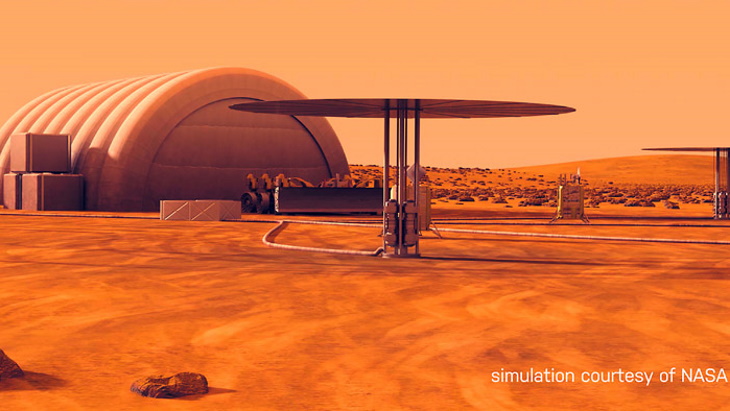 Simulation of a possible installation of the Kilopower lightweight fission system on Mars (Image: LANL/NASA)

"Nuclear energy is critical to United States national security. That is why I have taken a series of actions to promote its development and facilitate its use," President Donald Trump said in the Order, which was signed on 5 January and issued yesterday. The purpose of the Order is to "revitalise" the US nuclear energy sector, "reinvigorate" its space exploration programme, and to develop "diverse energy options for national defence needs".

"It is the policy of the United States to promote advanced reactor technologies, including small modular reactors, to support defence installation energy flexibility and energy security, and for use in space exploration," the Order says.

Micro-reactors - described as a sub-set of small modular reactors, with a generation capacity of less than 10 MWe - have the potential to enhance energy flexibility and energy security at domestic military installations in remote locations, the Order says. It directs the Secretary of Defense to "establish and implement a plan" to demonstrate the capability and cost-effectiveness of a Nuclear Regulatory Commission-licensed micro‑reactor at a domestic military installation.

If that demonstration is successful, the Secretary of Defense is then directed to identify opportunities for such capability at domestic military installations, which may have different requirements to the private sector such as the need to provide energy to facilities in the event that grid connections are compromised; to operate for an extended period of time without refuelling; and resistance to disruption from electromagnetic pulse events. It also directs the Secretary of Defense to pilot a transportable micro-reactor prototype.

Nuclear power sources that use uranium fuel or plutonium heat sources are essential to deep space exploration and in areas where solar power is not practical, the Order says. Nuclear power sources in the kilowatt range may be needed for demonstrating in-situ resource utilisation (ISRU) and robotic exploration of permanently shadowed craters on the Moon that contain frozen water. Nuclear reactors up to 100 kilowatts may be needed to support human habitats, ISRU, other facilities, and rovers on both the Moon and Mars, while megawatt-range power sources would be necessary for efficient, long‑duration deep space propulsion. "Affordable, lightweight nuclear power sources in space would enable new opportunities for scientific discovery. The sustainable exploration of the Moon, Mars, and other locations will be enhanced if small modular reactors can be deployed and operated remotely from Earth," it says.

The USA must take steps to ensure a domestic-origin supply of the HALEU which will be required by many advanced reactor concepts, the Order says. It directs the Secretary of Energy to complete the Department of Energy's ongoing 3-year demonstration of a United States-origin enrichment technology capable of producing HALEU for use in defence-related advanced reactor applications. "Within funding available for the demonstration project, the Secretary of Energy should develop a plan to promote successful transition of this technology to the private sector for commercial adoption," it says.

The Secretaries of State, Defense, Commerce, Energy and the Administrator of NASA are directed to develop a "common technology roadmap" describing potential development programmes and coordinating terrestrial-based advanced reactor and space-based nuclear power and propulsion efforts "to the extent practicable".

"The United States has used transportable nuclear reactors for nearly 70 years for functions like propelling aircraft carriers through the sea and enabling submarines to stay underwater for long periods of time," a statement from the White House Press Secretary said. "Using small modular reactors for national defence and space exploration will allow the United States to maintain and advance our leadership and dominance across space and terrestrial domains."