EDF notified France's nuclear safety regulator, the Autorité de Sûreté Nucléaire (ASN), on 3 March of a significant event concerning a design anomaly on three nozzles of the main primary system of the EPR reactor under construction at Flamanville. The concerned nozzles were produced in 2011 based on a 2006 design file. The regulator has asked EDF how it plans to deal with this anomaly. 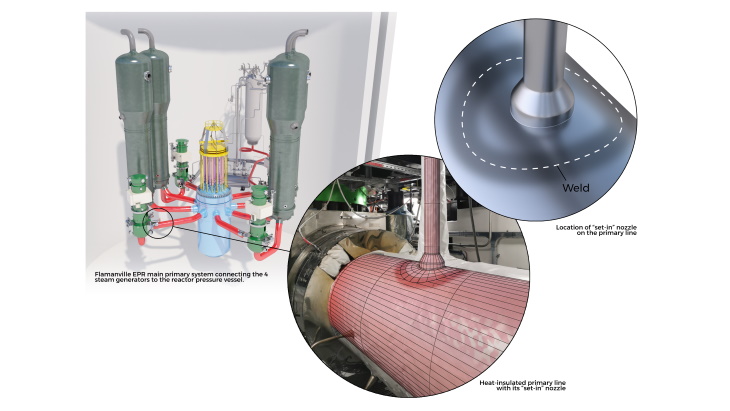 The location of the nozzle affected by the anomaly (Image: ASN)

In 2006, to make it easier to inspect the "set-in" weld on the main pipe, EDF and Framatome changed the design of these three nozzles, increasing the diameter of this weld. At the time, they did not identify the fact that the break size to be considered in the event of rupture of this weld now exceeded that considered in the safety studies.

This design anomaly was identified by EDF and Framatome in 2013, once the pipes concerned had been manufactured. In 2014, EDF decided to process this anomaly by extending to these welds the break preclusion approach applied to the main primary system pipes. This approach implemented by EDF on certain pipes of the Flamanville EPR reactor consists in reinforcing the design, manufacturing and in-service monitoring requirements, in order to ensure the highly improbable nature of any break in this equipment, thus obviating the need to study all the consequences of a break in the installation's safety case.

At the beginning of 2017, following anomalies detected on the welds of the main steam letdown pipes, ASN asked EDF to examine the conformity of the main primary system pipes with the "break preclusion" baseline requirements. The subsequent ASN examination of the answers provided by EDF regarding these nozzles, at the end of 2020, revealed that the welds of these three nozzles did not comply with all the break preclusion requirements.

Before issuing a position statement, ASN has asked EDF for its strategy to deal with this anomaly. The regulator also requested EDF identify its root causes and the reasons for its belated detection and to take corrective measures, notably to ensure that there are no other anomalies on the main primary system.

Framatome, which is supporting EDF, said it has launched an instruction aiming at precisely determining the causes of the event. In order to propose an adequate repair plan, it also began reassessing the characteristics of the nozzles compared with the reference study.

A quality deviation in the welding of the main secondary system - in which steam produced in the steam generator is conducted towards the turbine - of the Flamanville EPR was detected in March 2018. Further deviations in secondary system welds were subsequently detected.

In June 2019, the ASN requested EDF repair eight containment penetration welds in the Flamanville EPR in which quality deviations had been discovered. These welds are located in hard-to-access areas of the reactor. In October of that year, EDF adjusted the schedule and estimated cost of constructing the Flamanville EPR. It said that, assuming ASN approved its preferred option for repairing the welds using robots, the loading of fuel into the reactor would be further delayed until the end of 2022. The estimated cost of building Flamanville 3 would also increase to EUR12.4 billion (at the 2015 rate, excluding interim interest), up from EUR10.9 billion.

Construction work began in December 2007 on the 1650 MWe unit at the Flamanville site in Normandy. The EPR reactor was originally expected to start commercial operation in 2013.