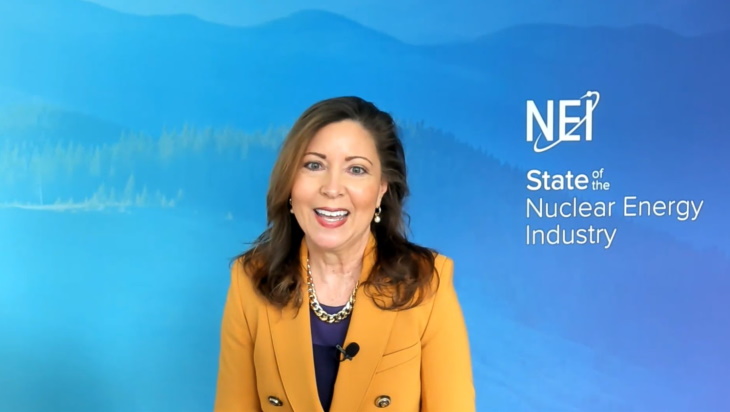 "There is no bigger opportunity in front of us than rebuilding the world's energy system around carbon-free sources," Korsnick said, adding that there is "no more debate about the need for swift action".

Over the last year, utilities, state governments, and the new Administration have made "concrete commitments" to bring carbon emissions from electricity generation close to zero by 2035 - even sooner than the 2050 target already acknowledged to be necessary to avoid the worst effects of climate change, she said.

"Fortunately, as we strive to meet those commitments, the US leads the world in producing a proven, carbon-free, scalable source of electricity, that enjoys bipartisan support," she said. "That source is nuclear energy. And there's no more serious debate: It's the key to making our climate commitments work."

"While we need to scale up every carbon-free source available, no other source can match nuclear energy's unique combination of attributes," she said. The value of nuclear energy's reliability has become even more apparent over the past year, with US nuclear power plants working on through "unprecedented" conditions like the COVID-19 pandemic and devastating winter storms across the southern USA, she said. Nuclear has become the second-largest source of electricity in the USA overall and surpassed coal for the first time ever, she added.

"Governments, NGOs, and the private sector all agree: Ambitious climate plans only work with nuclear energy. The only question is whether we're serious about making them work," she said.

"Technologies such as small modular reactors, micro-reactors, and other advanced designs will make nuclear even more efficient, even more affordable and even more versatile. These reactors will come in different sizes and designs. They will be able to change their output, pairing perfectly with more variable sources such as wind and solar," Korsnick said.

These developments can also bring electricity to hard-to-reach places - communities that generally rely on expensive, carbon-emitting sources -  where traditional reactors "just don't make sense", she added. "From Alaska and Puerto Rico to parts of the developing world, nuclear can be a gamechanger," she said. Tangible progress is being made towards the deployment of these technologies, she added.

Awards made last year under the US Department of Energy's (DOE) Advanced Reactor Demonstration Program mean that US companies "are able to actually build" advanced reactors, she said. "These are exciting steps towards getting the next generation of nuclear online before the end of the decade.

"Right now, TerraPower and X-Energy are finalising contracts with DOE for these kinds of demonstrations. Kairos Power and Southern Company Services are finalising contracts with DOE on risk-reduction projects. General Atomics, MIT, and Advanced Reactor Concepts are all delivering their own conceptual designs. Elsewhere in the federal government, the Defense Department is moving forward with its own micro-reactor demonstration programme to improve national security and address some of the largest threats to our armed forces.

"The move to demonstration is significant. These new technologies will be cost-competitive, especially with carbon-emitting sources. The next generation of nuclear can not only make a decarbonised energy system work - it can make it affordable," she said. To form the core of a clean energy system such technologies must be commercialised successfully, she added.

"Now we have to move beyond understanding and interest to action. Today, I'm calling on policymakers and executives to back up their pledges by making commitments to advanced reactors as part of their energy plans," she said.

She called for continued bipartisan support from US policymakers, and highlighted the CLEAN Future Act, first introduced last year. This legislation, she said, would create powerful incentives to build new nuclear plants, but such comprehensive legislation would take time to pass and to implement. In the meantime, she said, complementary policies, such as the American Nuclear Infrastructure Act, approved by the Senate Environment and Public Works Committee last year, are needed "to make sure the plants that we have, stay online."

She added: "Our climate plans can't work if we go backwards by shuttering our nuclear plants. But that is exactly the possibility we face. This year, four reactors are under threat of closure in Illinois alone. In that state, they produce twice as much clean electricity as wind and solar combined," she said. "If they shut down, carbon-emitting sources will likely fill the gap. In 2020, our lost generation from coal was replaced almost entirely with natural gas."

Korsnick urged state-level action to prevent future nuclear shut-downs and put nuclear on an "even playing field" with other carbon-free sources. Washington and Virginia have already passed clean energy standards, she noted, while Illinois and Minnesota, where clean energy debate, interrupted by the pandemic, have now resumed. She also highlighted state-level actions, such as tax incentives in Nebraska, a small modular reactor study in Montana and funding for SMR manufacturing in Washington.

"We're seeing movement because these states are realising an obvious truth: We can't talk about the urgency of decarbonising while sacrificing our most reliable source of carbon-free electricity. We can't celebrate bold plans while conceding defeat against the climate crisis.

"Either we're serious about building a better energy future, or we aren't. Action on nuclear energy will show our true priorities. Nuclear energy is the power source that can make it all work. It can turn some of the biggest threats we face into opportunities."