Barakah unit 1 entered commercial operation on 6 April, the Emirates Nuclear Energy Corporation (ENEC) has announced. The unit, which is operated by Nawah Energy Company, has been the single largest electricity generator in the UAE since reaching 100% power in early December. ENEC said the 1400-megawatt unit, which is in the Al Dhafra region of Abu Dhabi, is now providing "constant, reliable and sustainable electricity around the clock". As a result, ENEC says it is "now leading the largest decarbonisation effort of any industry in the UAE to date". 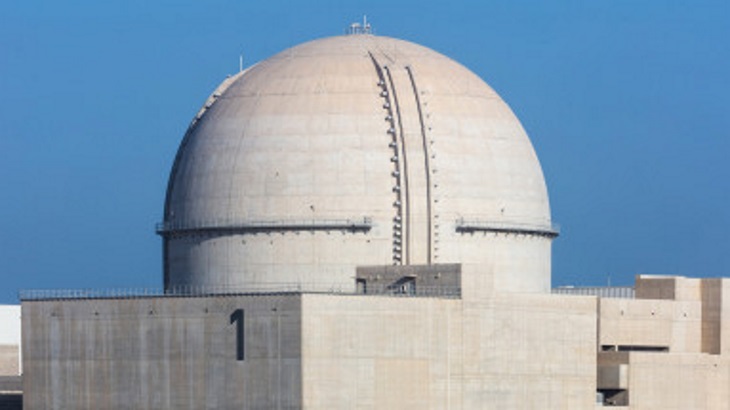 Barakah 1 is the first nuclear power unit in the Arab world (Image: ENEC)

The start of commercial operation followed a period of extensive testing, overseen by the Federal Authority for Nuclear Regulation, which has conducted 312 independent inspections of the plant to date. These reviews were conducted alongside more than 42 assessments and peer reviews by the International Atomic Energy Agency and World Association of Nuclear Operators, ENEC said.

"After more than a decade of strategic planning, programme development and construction, today we are confidently marking the start of a new chapter in for the UAE’s transition to cleaner energy sources," ENEC CEO Mohamed Ibrahim Al Hammadi said.

Sama Bilbao y León, director general of World Nuclear Association said: "The UAE’s commitment to a clean energy future that ensures, at the same time, the sustainable socio-economic development of everyone in the country, is one that needs to be replicated by many more countries around the world. Nuclear power will need to be at the heart of this energy transformation if we are to stand a chance of achieving net-zero carbon emissions by 2050."

The Barakah nuclear power plant, which is being built by a consortium led by the Korea Electric Power Corporation, consists of four APR-1400 units. Construction of the plant began in 2012. Unit 2 has now completed the fuel loading process and is working through all of the required processes prior to start-up, which is scheduled for later this year. Construction of units 3 and 4 are 94% and 89% complete, respectively.

Barakah One Company, ENEC’s subsidiary in charge of the financial and commercial activities of the Barakah project, signed a power purchase agreement with the Emirates Water and Electricity Company in 2016 to purchase all electricity generated at the plant for the next 60 years.