President Xi Jinping and US President Barack Obama will meet Thursday afternoon on the sidelines of the fourth Nuclear Security Summit (NSS) in a bid to expand cooperation and manage differences between the two super powers.

Xi arrived at the Joint Base Andrews in Maryland on Wednesday evening from Prague, Czech Republic, where he paid a three-day state visit. Prague was also where Obama made his speech about a nuclear-free world on April 5, 2009, which led to the birth of the first NSS in Washington in 2010.

Both Chinese and American officials and experts hope the meeting, the eighth between the two presidents since 2013, will help keep bilateral relations on a healthy track.

Cheng Li, director of the John L. Thornton China Center of the Brookings Institution, praised Xi's visit despite growing tension in the South China Sea. Many Chines believe that disputes over maritime territories between China and some of its neighbors have become more complicated in recent years because of US involvement.

Li said a high-level meeting is important in building trust. "I always believe that the problem between China and the US is not ideology or interest, but miscalculation," he said.

He hoped that Xi and Obama will reach some agreement on the South China Sea issue.

Jeffrey Bader, a senior fellow at Brookings in Washington and a principal adviser for Obama on Asia from 2009 to 2011, described Obama's only bilateral meeting during the summit that will be attended by 50 plus heads of state and government as "a sign of respect" for Xi and an indication of how important Obama considers the US relationship with China.

He believes the meeting is likely to focus a good deal on the South China Sea, saying there is concern in Washington and the region about how China might react, beyond formal rejection, to a decision by the International Tribunal in April or May regarding the Philippine complaint on the UN Law of the Sea (UNCLOS). 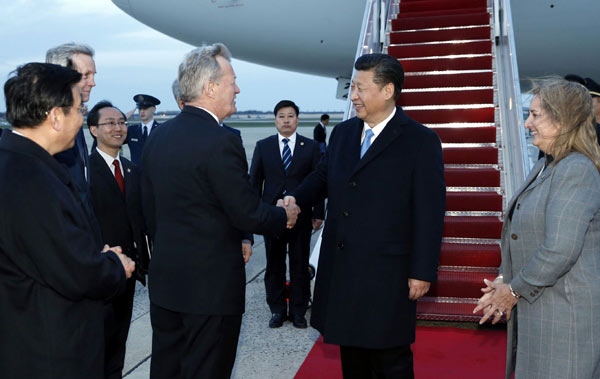 China has long stated that it will not participate or accept such mandatory arbitration. Foreign Minister Wang Yi said in Washington last month that when China signed the UNCLOS 10 years ago, it made it clear that it would not accept mandatory arbitration specified under the Article 298, a declaration that was made by some 30 signatory nations including the UK, France and Russia. The US Congress is still unwilling to ratify the UNCLOS.

It is expected that the denuclearization of the Korean peninsula will also be a key topic. China has supported the UN Security Council Resolution 2270 that imposes sanctions on Pyongyang. China has also called all sides to refrain from taking actions that further raise tension there. The US and South Korea are holding their largest joint military exercises ever, with 17,000 American and 300,000 South Korea troops.

China has urged a resumption of dialogue and proposed a parallel approach for the DPRK to abandon its nuclear weapon program while the US and South Korea agree to sign a peace treaty with DPRK to replace the 1953 armistice treaty.

"It would be good for both sides if they can use this year to stabilize the relationship before it is turned over to Obama's successor next January," Bader wrote on the Brookings website. Xi and Obama are expected to see each other again at the G-20 Summit at Hangzhou in East China in September and the APEC leaders' summit in Lima, Peru, in November.

Douglas Paal, vice-president for studies and director of the Asia program at the Carnegie Endowment for International Peace, said that Obama's meeting with Xi being the only bilateral meeting for Obama at the summit "suggests the importance of US-China leadership communications".

"This situation cries out for leaders to communicate and manage the rising tensions. Each side sees the other as at fault. Some signs of mutual restraint are required," he said.

High expectations for the Xi-Obama meeting have also been expressed by both governments. Chinese Vice-Foreign Minister Li Baodong called the meeting of "profound significance in pushing forward the continued and steady development of bilateral relationship." The White House said it will present an opportunity to advance US-China cooperation on a range of issues of mutual interest, while also enabling the two leaders to address areas of disagreement constructively.

"I think the high tempo of senior-level engagement with China is a recognition of the fact that this is where problems get solved and decisions get made," Dan Kritenbrink, senior director for Asian affairs of the National Security Council, said on Tuesday.

The engagement of the two leaders in Paris was vital in helping secure an ambitious climate agreement and their phone call in February supporting the reaching of the UN Security Council Resolution 2270, according to Kristenbrink.

A full range of bilateral, regional and global issues, from the Bilateral Investment Treaty (BIT) to counterterrorism, are expected to be discussed on Thursday.

China replaced Canada last year as US' top trade partner. The two largest economies have greatly expanded their cooperation in the last few years, such as in military-to-military exchanges, non-proliferation leading to the P5+1 Iran nuclear deal and in Afghanistan in the training of young diplomats.