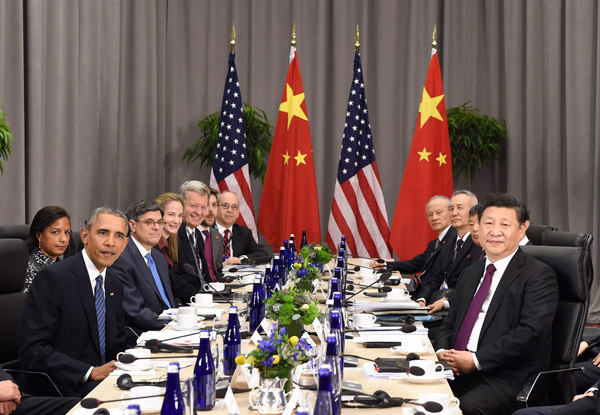 China and the United States on Thursday reaffirmed their joint commitment to global nuclear security and pledged to continue cooperation in this area beyond the Nuclear Security Summit (NSS) process.

In a joint statement released as Chinese President Xi Jinping and US President Barack Obama met on the sidelines of the fourth NSS, the two countries declared their "commitment to working together to foster a peaceful and stable international environment by reducing the threat of nuclear terrorism and striving for a more inclusive, coordinated, sustainable and robust global nuclear security architecture for the common benefit and security of all."

Nuclear security cooperation has become a bright spot in the building of a new type of major-country relations between the world's largest developing and developed countries.

In February, the two sides carried out the inaugural round of bilateral discussions on nuclear security in Stockholm, Sweden.

"We plan to continue this dialogue on an annual basis, so as to intensify our cooperation to prevent nuclear terrorism and continue advancing Nuclear Security Summit goals," said the joint statement.

In a more recent example, a nuclear security center of excellence (COE) jointly financed and built by the Chinese and US governments was inaugurated in suburban Beijing on March 18. It is the largest, best equipped and most advanced facility of its kind in the Asia-Pacific region.

The COE, said the statement, "is a world-class venue to meet China's domestic nuclear security training requirements, as well as a forum for bilateral and regional best practice exchanges, and a venue for demonstrating advanced technologies related to nuclear security."

The two countries pledged continued engagement on nuclear security training and best practices so as to maximize the use and effectiveness of the COE, and China vowed to sponsor training programs at the site for regional partners and other international participants to further promote global nuclear security awareness and engagement. 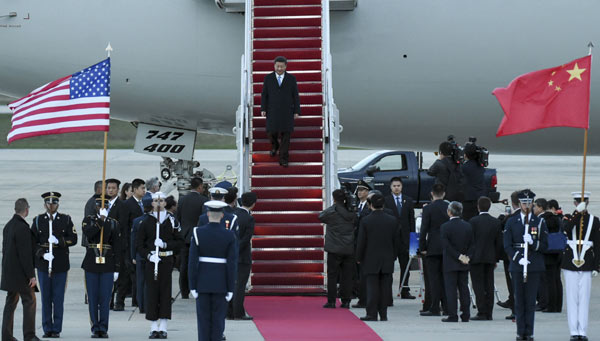 Chinese President Xi Jinping arrives on his official plane to attend the Nuclear Security Summit meetings in Washington, on the tarmac at Joint Base Andrews, Maryland March 30, 2016. [Photo/Xinhua]

China, according to the joint statement, also "reaffirms its readiness, upon the request of respective countries, to convert all remaining Chinese-origin MNSRs worldwide."

Recognizing the need for strengthened international cooperation to counter nuclear smuggling, China and the United States reiterated their "enduring commitment to prevent terrorists, criminals or other unauthorized actors from acquiring nuclear or other radioactive materials."

The two sides "will continue to coordinate efforts to strengthen counter nuclear smuggling capabilities and share best practices with the international community, taking full advantage of the training programs sponsored by the China Customs Training Center for Radiation Detection," said the statement.

Furthermore, Beijing and Washington expressed satisfaction on "the fruitful cooperation between the two sides in enhancing the security of radioactive sources, in particular regarding recovery of disused sources and transport security of radioactive sources," and pledged to further strengthen cooperation in this regard and facilitate the sharing of experiences and best practices with other countries.

Stressing that "strong communication and cooperation are essential to nuclear security," the two countries committed themselves to continuing strong support for the work of relevant international agencies on nuclear security in accordance with their respective mandates.

The NSS process, initiated by Obama and headlined by a biennial leaders' meeting since 2010, will come to an end in its current format after the fourth summit, though nuclear security is faced with increasingly grave and complicated challenges.

Under such circumstances, China and the United States expressed their "strong commitment" to addressing the evolving nuclear security challenges through sustained efforts after the current NSS process concludes, said the joint statement.