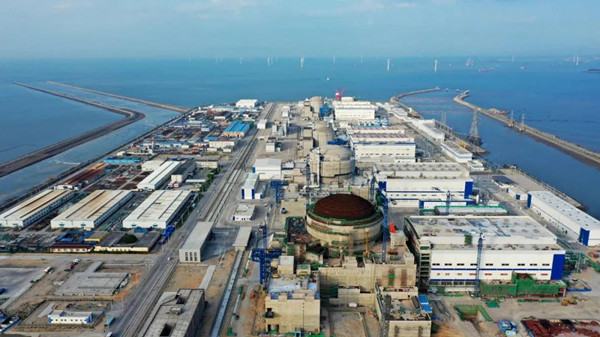 Each Hualong One unit generates approximately 10 billion kWh of electricity per year, meeting the annual demand of industry as well as the daily lives of 1 million local residents. This is equivalent to reducing standard coal consumption by 3.12 million tons, cutting carbon dioxide emissions by 8.16 million tons, or planting more than 70 million trees.

Calculated this way, how many years will be shortened by one Hualong One unit towards achieving the carbon dioxide emissions peaking and carbon neutrality goals？

Hualong One is China's domestically developed third-generation nuclear power technology with full intellectual property rights. It epitomizes the low carbon feature of nuclear energy and the high-tech feature of the nuclear industry.

Eighty-eight percent of the first Hualong One unit was domestically produced. But in the early stages, China's key nuclear power equipment relied on imports and the country was often strangled in term of technology.

To promote the self-reliance of China's nuclear power technology, China National Nuclear Corporation (CNNC) drew upon the international advanced concept of passive safety systems of the third generation nuclear power technology based on more than 30 years of experience in nuclear power research, design, manufacturing, construction and operation. It spent more than two decades on 54 related research projects covering areas from basic application technology research, reactors, advanced nuclear fuels, design of safety systems to equipment development, applying for hundreds of patents at home and abroad and mastering a large number of core technologies. These achievements were not possible without the concerted efforts of more than 5,300 equipment developing enterprises.

The independent innovation of Hualong One promotes various other disciplines and fields since nuclear power is closely related to other majors. Besides, Hualong One has obvious comparative advantages in cost, industrial chain and construction over other third-generation reactors around the globe, which is conductive to driving the optimization and upgrading of high-end equipment, materials and processes and strengthening the equipment manufacturing system.

To achieve the carbon dioxide peaking emissions and carbon neutrality goals, China's renewable energy will enter a new development stage featuring a larger scale and a higher proportion that is low-cost and market-oriented during the 14th-Five-Year-Plan period (2021-2025) and beyond.

Nuclear power and other clean energy sources are not mutually exclusive. Energy diversity is beneficial to ensuring energy security.

The process of each kind of energy from the source to playing its role is constrained by various objective factors, which are different for various energy sources. So we can't put all eggs in one basket, otherwise systemic risks may be triggered after one factor changes.

Compared with the ideal energy mix that is diversified and balanced, China's nuclear power occupies a relatively low proportion.

About 10 percent of the global electricity was generated by nuclear power from the end of the last century to the beginning of this century, while the proportion in China is 5 percent. As a base load power source, nuclear energy should play a better role.