Kansai Electric Power Company today restarted unit 3 of its Takahama nuclear power plant in Fukui prefecture. The company soon plans to start loading fuel into unit 4 at the plant ahead of its restart.

Takahama 3 was restarted at 5.00pm today, Kansai said, adding that it expects the 870 MWe pressurized water reactor to reach criticality tomorrow. The unit's output will gradually be increased while tests are conducted and, following a final inspection by the Nuclear Regulation Authority (NRA), it is expected to re-enter commercial operation by the end of February. However, Kansai said this schedule may change "depending on the result of the ongoing inspection by the NRA". 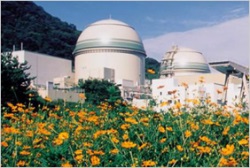 The company plans to start loading fuel into the core of Takahama 4 on 31 January as all necessary preparatory inspections and activities have now been completed. That unit is expected to resume operation in late March at the earliest.

Units 3 and 4 of the Takahama plant have remained offline since being shut for periodic inspections in February 2012 and July 2011, respectively.

Kansai first applied to the NRA for permission to restart the units in July 2013. It subsequently submitted various amendments to its plans to increase the plant's resistance to extreme events, such as earthquakes, tsunami and tornadoes, in accordance with the regulator's requirements. Such amendments have resulted from the findings of reviews carried out along the way, incorporating details from the latest equipment designs.

In February 2015, the NRA gave its final permission for Kansai to make the required safety upgrades at the units prior to their restart. The company had reportedly aimed to restart the two reactors by last November. However, this remained blocked by a temporary injunction imposed by the Fukui District Court in April, which was eventually lifted on 24 December.

In a statement, Kansai's president and director Makoto Yagi said, "We will give sincere and deliberate support to the subsequent inspections to be performed by the Nuclear Regulation Authority." He added, "At the same time, we will carefully take steps towards the resumption of the commercial operation of our nuclear power plants under an enhanced system of oversight established in cooperation with the manufacturers and contractors while making safety the top priority."

Unit 1 of Kyushu Electric Power Company's Sendai plant in Kagoshima prefecture was the first of Japan's operable reactors to resume operation since September 2013 when it restarted last August. The restart of unit 2 followed in October.

Another 20 reactors are moving through the restart process, which has been prioritised to bring on the most-needed reactors first, in the localities and prefectures more supportive of restart.