A prototype fuel assembly for use in China's HPR1000 reactor design has completed the first fuel cycle irradiation test. Construction of three HPR1000 units has already begun in China. 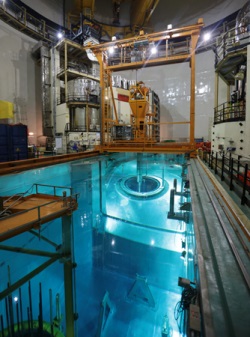 CNNC noted that, in accordance with international practice, following the design and manufacture of a new type of nuclear fuel assembly, the fuel must undergo irradiation tests in a reactor to validate its overall performance. These tests, it said, check the irradiation, corrosion and mechanical properties of the assembly.

In 2012 central planners in Beijing directed CNNC and the other large nuclear builder and operator, China General Nuclear (CGN), to 'rationalise' their reactor programs. This meant CNNC's ACP1000 and CGN's ACPR1000 were 'merged' into one standardised design - the Hualong One.

Construction of two HPR1000 units is already under way at CNNC's Fuqing plant in Fujian province, as well as the first of two such units at CGN's Fangchenggang plant in Guangxi province.

In December, CNNC and CGN agreed to create a 50-50 joint venture to promote the Hualong One in overseas markets.

CGN agreed in October to form a joint venture company with EDF Energy to seek regulatory approval for a UK version of the HPR1000 design. The following month, China and Argentina signed an agreement to build a Hualong One reactor as the South American country's fifth nuclear power unit.