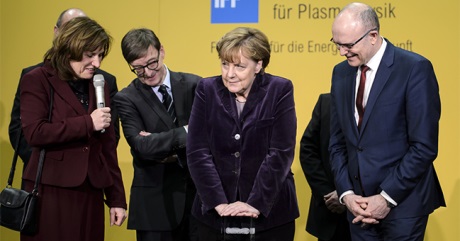 Since the start of its operation on 10 December, the Wendelstein 7-X device at the Max Planck Institute for Plasma Physics (IPP) in Greifswald, Germany, has produced more than 300 plasmas using helium. These served primarily to clean the plasma vessel, allowing the plasma temperature to increase. The first plasma in the machine had a duration of one-tenth of a second and achieved a temperature of around one million degrees Celsius. Eventually, a plasma temperature of six million degrees Celsius was achieved.

In a ceremony held yesterday, German Chancellor Angela Merkel pressed a button to initiate the first hydrogen plasma in Wendelstein 7-X. A 2MWt pulse of microwave heating transformed a tiny quantity of hydrogen gas into an extremely hot low-density hydrogen plasma. This entailed separating the electrons from the nuclei of the hydrogen atoms. Confined in the magnetic cage generated by Wendelstein 7-X, the charged particles levitate without making contact with the walls of the plasma chamber. 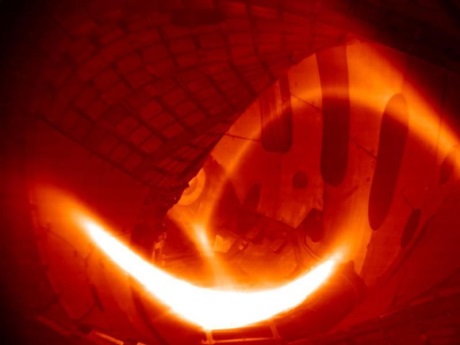 Hans-Stephan Bosch, head of the division responsible for operation of Wendelstein 7-X, said: "With a temperature of 80 million degrees and a lifetime of a quarter of a second, the device's first hydrogen plasma has completely lived up to our expectations."

A statement from the IPP said the current initial experimentation phase will last until mid-March, after which the plasma vessel will be opened in order to install carbon tiles to protect the vessel walls and a so-called "divertor" for removing impurities.

"These facilities will enable us to attain higher heating powers, higher temperatures, and longer discharges lasting up to 10 seconds," explained Thomas Klinger, head of the project. Successive extensions are planned until, in about four years, discharges lasting 30 minutes can be produced and it can be checked at the full heating power of 20MWt whether Wendelstein 7-X will achieve its optimisation targets.

Wendelstein is a stellarator fusion reactor - different to a tokamak fusion reactor such as the Joint European Torus in the UK or the Iter device under construction in France. A tokamak is based on a uniform toroid shape, whereas a stellarator twists that shape in a figure-8. This gets around the problems tokamaks face when magnetic coils confining the plasma are necessarily less dense on the outside of the toroidal ring.

The Wendelstein 7-X will not be used to produce energy but should demonstrate whether stellarators are suitable as a power plant. It should show that stellarators - with discharges lasting 30 minutes - have the ability to operate continuously. In contrast, tokomaks can only operate in pulses without auxiliary equipment.

Some €370 million ($408 million) has been invested in the Wendelstein 7-X project, with funding from federal and state governments and the European Union.