Plans for the decommissioning of three nuclear power units in Japan's Fukui Prefecture have been submitted to the country's nuclear regulator for approval. Mihama units 1 and 2 and unit 1 of the Tsuruga plant were among five reactors officially taken out of service last April.

Kansai Electric Power Company and Japan Atomic Power Company (JAPC) today announced they had submitted their decommissioning plans for the three units - which were all officially shut down on 27 April 2015 - to the Nuclear Regulation Authority (NRA) for approval. Their plans outline the facilities and equipment to be dismantled and a timetable for completing the work. 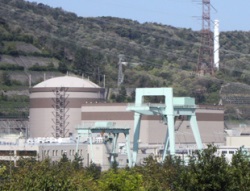 JAPC said it expects to take 24 years to decommission Tsuruga 1 - a 341 MWe boiling water reactor that started up in 1970 and is one of Japan's oldest nuclear reactors. The decommissioning is to be carried out in three stages: the first stage, lasting about nine years, will involve preparing the reactor for dismantling (including the removal of all fuel), while the second, also lasting nine years will be to actually dismantle the reactor and other major equipment. The third stage, taking about six years, will involve the demolition of the reactor building.

The company said it anticipates a total of some 20,600 tonnes of solid waste to be generated during the decommissioning of Tsuruga 1. This will include about 40 tonnes of high-level waste, 1990 tonnes of intermediate-level waste and 10,760 tonnes of low-level waste. The remaining waste will not need to be treated as radioactive waste.

Meanwhile, Kansai said it expects to take around 30 years to decommission Mihama 1 and 2. These are 340 MWe and 500 MWe pressurized water reactors, respectively, that had been in operation since the early 1970s.

Both Kansai and JAPC announced in mid-March 2015 that they had decided to decommission the three units, which together with Japan's other power reactors had been idled after the Fukushima Daiichi accident of 2011, rather than applying to restart them. Both companies said their decisions followed an assessment of the work needed to ensure the units meet requirements introduced by the NRA in July 2013.

Independent studies of Tsuruga 1 completed in 2014 confirmed that geologic faults running under the site are inactive. However, JAPC said that while it would have been technically feasible to bring Tsuruga 1 up to the standards required, the size of the project and the degree of capital investment required underpinned the decommissioning decision.

Kyushu Electric Power Company, which also shut down unit 1 of its Genkai nuclear power plant in Saga Prefecture on 27 April, submitted its decommissioning plan for that unit to the NRA on 22 December. Chugoku Electric Power Company, which shut unit 1 of its Shimane plant in Shimane Prefecture at the same time, has yet to submit a decommissioning plan for the unit.