Canada has marked the fortieth anniversary of operations at the world's largest cyclotron accelerator, the 520 MeV Main Cyclotron at the Triumf national laboratory for particle physics. Celebrations were attended by science minister Kirsty Duncan. 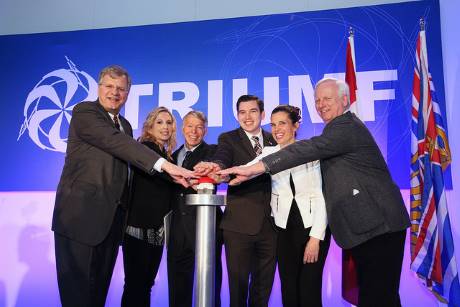 The cyclotron was officially commissioned on 9 February 1976 by the country's prime minister at the time, Pierre Trudeau. Its controls and electronics have been continually upgraded, and the facility - which accelerates protons up to three quarters of the speed of light - has remained the "workhorse" at the centre of Triumf's operations.

Duncan said that Triumf was a "mecca" for researchers in the fields of particle and nuclear physics, molecular and materials science, and nuclear materials. "Thanks to Triumf's ambitious international partnerships, Canadian researchers have been at the centre of some of the most important global research projects," she said.

As well as being home to Canada's only proton therapy cancer treatment centre, Triumf recently set a new record for the production of medical radioisotopes using a cyclotron as an alternative to production in a research reactor. Technetium-99m, used in around 80% of all medical radioisotope procedures, can be produced directly in a cyclotron by bombarding a molybdenum-100 target with a proton beam. The Canadian government has invested in projects, including Triumf, to bring non-reactor-based radioisotope technologies to market through its ITAP (Isotope Technology Acceleration Program) initiative.

Located on the University of British Columbia's campus near Vancouver, Triumf is owned and operated by a consortium of Canadian universities with funding from the National Research Council of Canada.