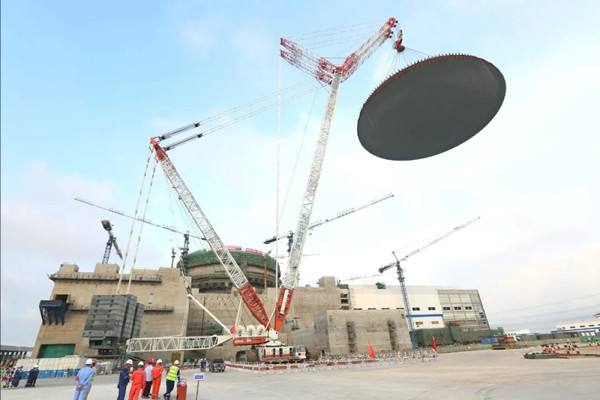 The outer containment dome of unit 6 at the Fuqing nuclear power plant is lifted, ready to be installed on July 25. [Photo/CNNC]

The outer containment dome was successfully installed on July 25 onto the containment building of unit 6 at the Fuqing nuclear power plant -- in Fuzhou, capital of East China's Fujian province -- according to China National Nuclear Corporation, or CNNC, which is installing the reactor.

The unit is a world demonstration project for Hualong One, also known as HPR 1000, a domestically developed third-generation nuclear power technology.

Officials said the successful installation marked the point where the HPR 1000 project construction process has been optimized and improved -- providing invaluable experience for the subsequent construction of other Hualong One units.

Experts said that Hualong One projects have double-layer containment shells, which give them maximum protection against collisions and other potential accidents.

The outer dome is currently the largest shell structure for nuclear power plants under construction in the world, CNNC officials said. It has the physical characteristics of a large structural span, dense steel bars and high-strength concrete.

The outer containment dome for the Fuqing unit 6 reactor is mainly a steel structure -- weighing about 420 metric tons, with a base diameter of about 53 meters and a height of around 13 m. It mainly provides protection for primary containment.

Officials said that a total of five nuclear power reactors with HPR 1000 technology are currently being constructed at home and abroad by CNNC. 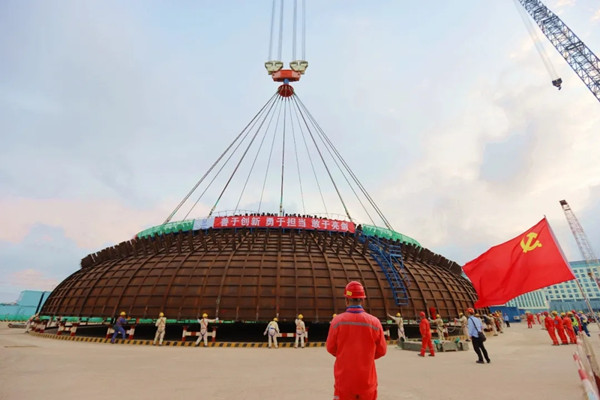 The outer containment dome of the Fuqing unit 6 reactor is installed successfully. [Photo/CNNC]