Japan's Toshiba Energy Systems & Solutions Corporation (Toshiba ESS) announced on June 8 it has completed the manufacture of the first of four toroidal field coils it is supplying to the International Thermonuclear Experimental Reactor (ITER) project. Nine of ITER's 18 toroidal field coils, plus a spare, are being fabricated in Europe with the other nine being made in Japan. Gigantic superconducting magnets, they will generate the magnetic cage to contain the ITER fusion reactor's plasma. 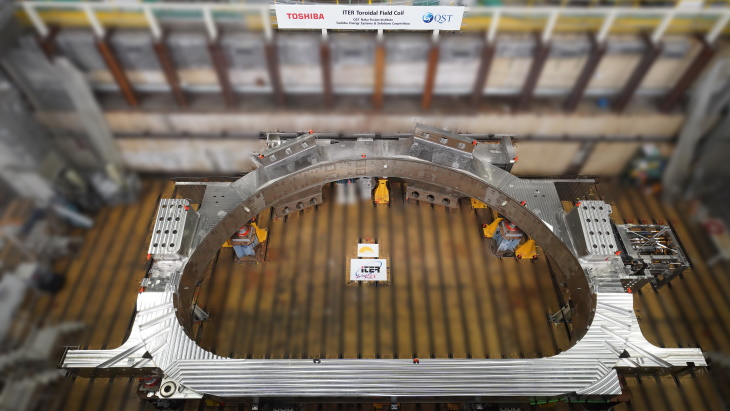 The European fabrication of the toroidal field coils is the result of a collaboration between the Iter Organisation's European domestic agency Fusion for Energy with ASG Superconductors, Iberdrola Ingeniería y Construcción, Elytt Energy, CNIM, SIMIC and the ICAS consortium. The manufacture of the first toroidal field coil in Europe was completed in May 2017.

Under a contract concluded in May 2014 with the Japan Atomic Energy Agency, Toshiba ESS is manufacturing four toroidal field coils, together with six coil cases. The company completed the first coil case in December 2018. It has now completed manufacturing the first coil, 16.5 metres in height, 9m in width and with a gross weight of about 300 tonnes.

Shinya Fujitsuka, director and senior vice president of the Power Systems Division at Toshiba ESS, said: "Toshiba ESS will continue to contribute to ITER, which will initiate plasma experiments in 2025, by supplying toroidal field coils and cases, which require highly precise processing technology to produce."

ITER is a major international project to build a tokamak fusion device designed to prove the feasibility of fusion as a large-scale and carbon-free source of energy. The goal of ITER is to operate at 500 MW (for at least 400 seconds continuously) with 50 MW of plasma heating power input. It appears that an additional 300 MWe of electricity input may be required in operation. No electricity will be generated at ITER.

The European Union is contributing almost half of the cost of its construction, while the other six members (China, India, Japan, South Korea, Russia and the USA) are contributing equally to the rest.

Site preparation works at Cadarache, southern France, began in January 2007, with first concrete for the buildings poured in December 2013. First plasma is planned for 2025, with deuterium-tritium fusion experiments commencing in 2035.