Russian nuclear fuel manufacturer TVEL has announced the start of construction of a 300 MW nuclear power unit enabled with the innovative BREST-OD-300 lead-cooled fast reactor at the site of the Siberian Chemical Combine, in Seversk. The reactor will run on mixed uranium-plutonium nitride (MNUP) fuel, specially developed for this facility as the "optimal solution" for fast reactors. 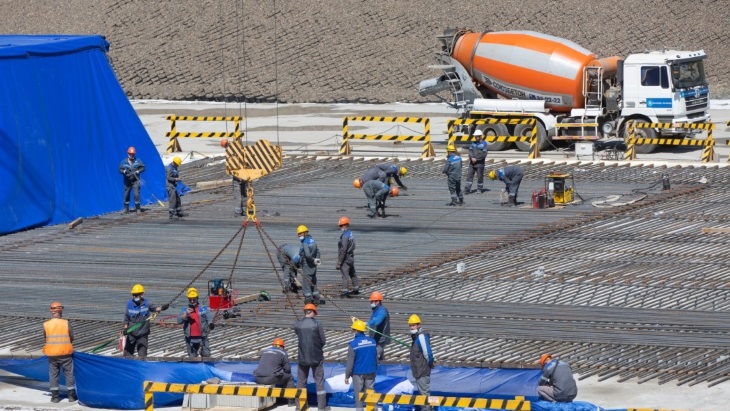 The start of construction on BREST-300 (Image: TVEL)

TVEL said that, for the first time in history, a nuclear power plant powered by a fast reactor will be built alongside closed nuclear fuel cycle servicing enterprises on one site. It will be an integral part of the Pilot Demonstration Energy Complex (PDEC) - a cluster of three interconnected facilities, including the nuclear fuel production plant (for fabrication and re-fabrication), the BREST-OD-300 power unit, and the facility for irradiated fuel reprocessing.

After reprocessing, the irradiated fuel from the reactor will be sent for re-fabrication, thereby giving this system the means to become "practically autonomous and independent of external resources supplies", said TVEL, which is a subsidiary of Russian state nuclear corporation Rosatom. PDEC is part of of Rosatom’s Proryv, or Breakthough, project that aims to close the nuclear fuel cycle.

"The nuclear power industry’s resource base will practically become inexhaustible thanks to the infinite reprocessing of nuclear fuel. At the same time, future generations will be spared the problem of accumulating spent nuclear fuel," Rosatom Director General Alexey Likhachov said in the TVEL statement.

TVEL President Natalia Nikipelova added that the Breakthrough project concerns not merely the development of innovative reactors, but also the introduction of a new generation of nuclear fuel cycle technologies. Production of dense nitride MNUP fuel will ensure the efficient operation of a lead-cooled fast reactor and consist entirely of recycled nuclear materials such as plutonium and depleted uranium, she said. This means more efficient and economically attractive radiochemical technologies for the processing of irradiated fuel and waste management, she added.

"Taken together, they will make the nuclear power of the future in fact renewable with a practically waste-free production chain," she said.

A fuel production facility and an irradiated fuel reprocessing module are scheduled to be built by 2023 and 2024, respectively, while the BREST-OD-300 reactor is expected to start operation in 2026.

TVEL says the BREST-OD-300 reactor will provide itself with its main energy component - plutonium-239 - by reproducing it from the isotope uranium-238.