NuScale SMR under consideration for Ukraine

Energoatom of Ukraine will explore the possible deployment of NuScale small modular reactors (SMRs) to replace fossil fuel plants, according to a Memorandum of Understanding (MoU) signed by the companies. It is the latest in a series of agreements on energy signed during the visit of a Ukrainian delegation to the USA. 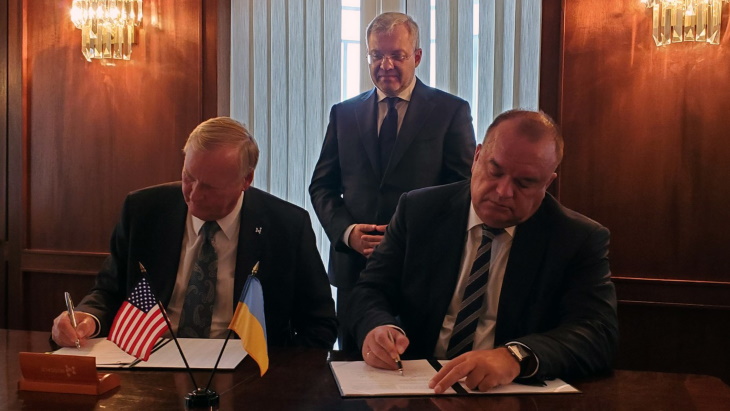 "We are considering the possibility of building small modular reactors in Ukraine to replace carbon-emitting thermal power plants and to increase the load following capacities of the Ukrainian energy system,” said Petro Kotin, acting president of Energoatom. NuScale CEO John Hopkins said the company was "excited to partner Energoatom."

Announcing the MoU yesterday, NuScale said it would support Energoatom to draw up a feasibility study including proposed project sites, the development of a project timeline and deliverables, cost studies, technical reviews, licensing and permitting as well as project-specific engineering and design work.

The agreement was signed during the ongoing visit of a Ukrainian delegation to the USA led by President Volodymyr Zelensky. On 30 August, a range of strategic agreements were signed for US support to the Ukrainian energy sector, alongside a Memorandum of Cooperation with Westinghouse towards construction of five new reactors using AP1000 technology.

The signing of the MoU by Energoatom and NuScale was witnessed by Ukrainian energy minister Herman Halushchenko. He said, "This is more evidence that cooperation in the energy sector is one of the key priorities of the strategic partnership between Ukraine and the USA. We are talking about the prospects for the development of nuclear energy in Ukraine over the next half century."

NuScale Power Modules are integrated pressurised water reactors with capacities of 77 MWe each and would be built in groups of four, six or 12. The company describes them as able to provide electricity, district heating, desalination, hydrogen production and other process heat applications.