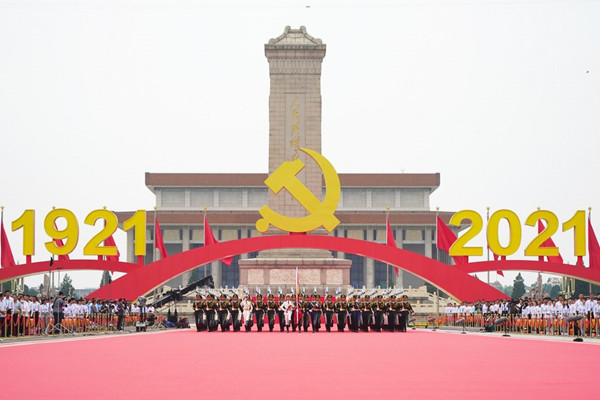 The national flag guards march during a flag-raising ceremony at a grand gathering celebrating the centenary of the Communist Party of China (CPC) at Tian'anmen Square in Beijing, capital of China, July 1, 2021. (Xinhua/Xing Guangli)

The 19th Central Committee of the Communist Party of China (CPC) started its sixth plenary session in Beijing on Nov. 8.

The plenum is scheduled to last until Thursday, according to a decision made at a meeting of the CPC Central Committee Political Bureau on Oct. 18.

The Political Bureau meeting also decided to submit the draft resolution to the plenum for deliberation.

The CPC has led all ethnic groups of the country in making remarkable achievements over the past 100 years in the history of human development, according to a statement issued after the October meeting.

Chinese people who had suffered subjugation and bullying since the advent of modern times had stood up. The Chinese nation is advancing toward modernization on all fronts and socialism has blazed a successful trail in the world's most populous country, the statement said.

It also said that China is taking strides to keep abreast with the times, and the Chinese nation is embracing a bright prospect of national rejuvenation.

It noted that Chinese Communists, with Mao Zedong, Deng Xiaoping, Jiang Zemin, and Hu Jintao as chief representatives, led the whole Party and people of all ethnic groups in achieving vital progress in the revolution, construction and reform, with precious experience accumulated. 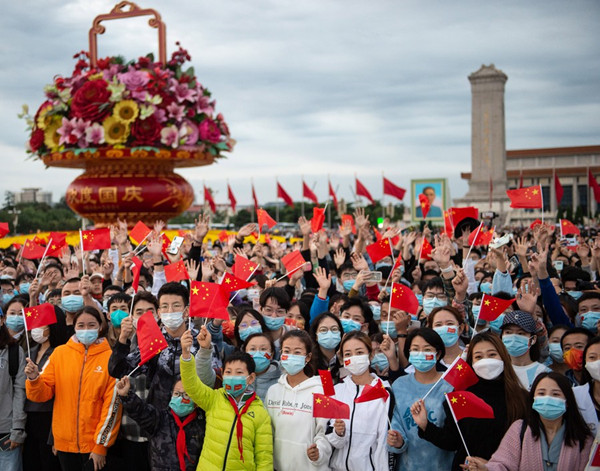 A flag-raising ceremony to celebrate the 72nd anniversary of the founding of the People's Republic of China is held at the Tian'anmen Square in Beijing, capital of China, Oct. 1, 2021. (Xinhua/Chen Zhonghao)

Since the 18th CPC National Congress in 2012, the CPC Central Committee with Xi Jinping at the core has led the whole Party and people of all ethnic groups in making new notable achievements and accumulating new precious experience.

Socialism with Chinese characteristics has demonstrated its strong vitality. The Party, the military, and the public have become united as never before. China has further consolidated its international status. All these factors have provided the cause of national rejuvenation with more robust institutions, stronger material foundations, and a source of inspiration for taking greater initiative, the statement said.

Through tenacious struggle, the Party and the Chinese people have shown the world that the Chinese nation has achieved the tremendous transformation from standing up and growing prosperous to becoming strong, and that China's national rejuvenation has become a historical inevitability, the statement said.

In drafting the resolution, the views and suggestions from both within and outside the Party were collected. Xi had also chaired a symposium to hear from the leaders from the central committees of the non-CPC political parties, head of the All-China Federation of Industry and Commerce, and people with no party affiliation.

The draft won wide recognition from various regions, departments, and sides, along with delegates to the 19th CPC National Congress.