Negotiations to address outstanding nuclear verification issues in Iran have so far been inconclusive, IAEA Director General Rafael Mariano Grossi said on Nov 24. Negotiations among parties to the Joint Comprehensive Plan of Action - Iran and five world powers - are expected to resume in Vienna next week. 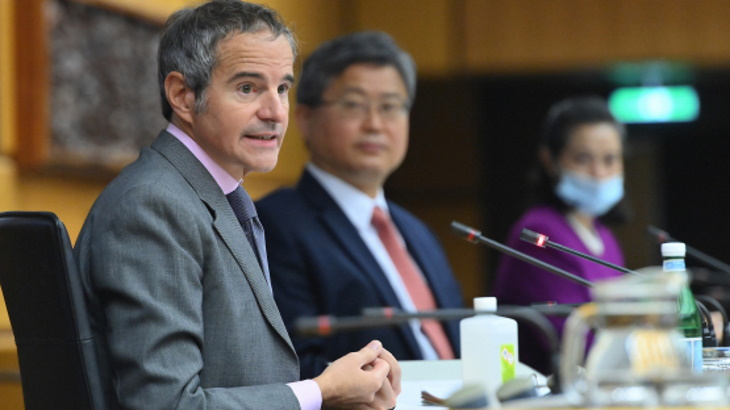 Grossi makes his presentation to the IAEA Board (Image: Dean Calma/IAEA)

Grossi's comments were made in his statement to the IAEA's 35-member Board of his latest report on verification and monitoring in Iran, and in a subsequent livestreamed press conference.

Grossi met with Mohammad Eslami, vice president of Iran and head of the Atomic Energy Organisation of Iran, and Minister of Foreign Affairs Hossein Amir-Abdollahian in Tehran on 23 November. The IAEA Director General said the talks had been "constructive, correct and professional" but there had been a number of outstanding issues in terms of safeguards matters on which it had not been possible to reach an agreement.

"We MUST reach an agreement," Grossi said. "I will not stop trying."

The IAEA has been verifying and monitoring the implementation by Iran of its nuclear-related commitments under the Joint Comprehensive Plan of Action (JCPOA), but since February this year verification and monitoring activities have been affected as a result of Iran's decision to stop the implementation of its nuclear-related commitments, the IAEA said. A temporary agreement between Iran and the IAEA has facilitated the maintenance of continuity of knowledge, Grossi said, but the "repeated prolongation" of the agreement is becoming a "significant challenge" to this, he said.

France, Germany and the UK - also known as the E3 - in a joint statement to the IAEA, called upon Iran "urgently" to restore IAEA access to Karaj. "Restoring full transparency and monitoring arrangements will help build the confidence of the international community in the peaceful nature of Iran’s nuclear programme," they said.

The JCPOA was agreed in 2015 between Iran and the so-called P5+1 - the US, UK, France, China, Russia and Germany. Under its terms, Iran agreed to limit its nuclear activities including uranium enrichment over a 15-year period and to allow in international inspectors in return for the lifting of economic sanctions. The USA withdrew from the deal in May 2018 and in January 2021 the IAEA reported that Iran had resumed enriching uranium to 20% purity at its underground Fordow plant.