The disassembly phase of Ontario Power Generation's (OPG's) refurbishment of Darlington unit 3 has now been completed and the reassembly phase has begun, the company said yesterday. The disassembly of the reactor included the world's first use of a combined pressure and calandria tube (PT-CT) removal technique. Separately, an automated process to install and inspect calandria tubes is to be used in the refurbishment of Bruce Power's Bruce 3 in another industry 'first'. 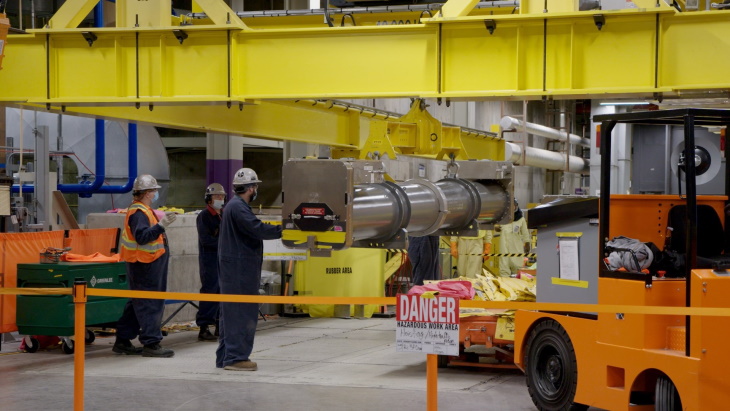 The new tool removal toolset in use at Darlington 3 (Image: OPG)

The first-of-its-kind work on Darlington’s unit 3 was completed on 27 October through a collaboration by OPG, the SNC-Lavalin Aecon Joint Venture, Canadian Nuclear Laboratories (CNL), CANDU Energy and Promation Nuclear. In previous CANDU refurbishments, pressure tubes (which contain the fuel bundles and through which the reactor's primary coolant flows) and calandria tubes (which contain the pressure tubes as well as so-called garter springs) were removed individually. In addition, the garter springs - which act as a spacer between the calandria and pressure tube - often became separated during the process, adding a further challenge to the work.

While planning unit 3's refurbishment, the project team realised it may be possible to adapt the existing reactor disassembly toolset to remove the pressure tubes and calandria tubes at the same time, saving time, money and also reducing radiation exposure for the personnel carrying out the work. After proof-of-concept tests, the innovative tube removal tool was fabricated and tested on a mock-up, and the team underwent training and rehearsed using the new toolset before using it to remove the tubes from unit 3.

Unit 3 is the second unit at the Darlington site to undergo refurbishment. When similar work was being carried out on Darlington unit 2, all the pressure tubes and calandria tubes - 560 tubes in all - were removed separately, placed in flasks and transferred to the on-site volume reduction facility, a process taking 78 days in total. This was reduced by more than 30 days using the new technique.

The new removal technology, along with lessons learned, will be used on the remaining two reactor refurbishments still to take place at Darlington and are expected to reduce the overall project duration by three months.

As reassembly of unit 3 begins, preparations are under way for the refurbishment of unit 1, which is set to begin in February 2022, when two Darlington units will be in refurbishment in parallel for the first time over the course of the project, which is scheduled for completion in 2026.

Separately, Ontario-based company ATS Automation Tooling Systems Inc is automating the installation and inspection of calandria tubes at Bruce unit 3. The company said it has recently received an order worth some CAD30 million (USD24 million) relating to the refurbishment of Bruce 3. In addition to the installation and inspection of calandria tubes, ATS will also provide training and support for Bruce Power's team and enter a partnership to provide spare replacement parts, it said.

The work is part of Bruce Power's intensive Major Component Replacement Project, which began in January 2020 and will see the refurbishment of six reactors. The first reactor to undergo refurbishment is unit 6. Work is scheduled to begin on unit 3 in 2023 followed by unit 4 in 2025.

Refurbishments will add some 30 years of operational life for each CANDU reactor.