Nuclear fuel is being loaded into the second reactor at Belarus's Ostrovets nuclear power plant. The plant's first reactor has already taken a significant role in the country's energy mix, said Minister of Energy Viktor Karankevich. 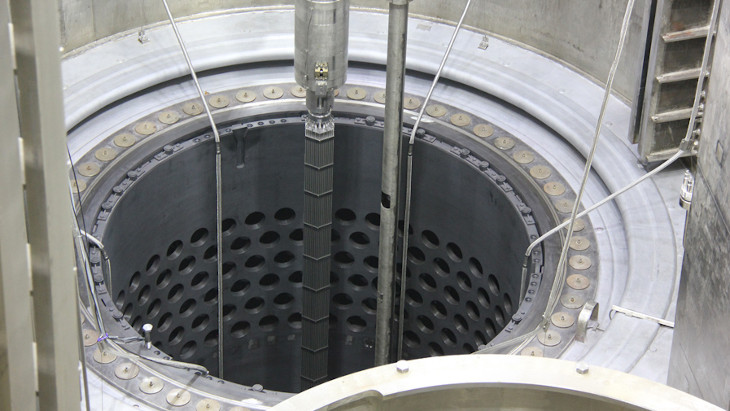 Fuel loading began this morning, said Atomstroyexport, the export subsidiary of Russia's state nuclear company Rosatom. "The most interesting, exciting and responsible period of construction of the nuclear power unit is its commissioning after the completion of a huge amount of construction and installation work," said Alexander Lokshin, the company's president. "At this stage, cubic metres of concrete, tons of metal structures, kilometres of cable and pipelines turn into a living organism that will function and benefit people for at least 60 years."

The VVER-1200 reactor is being loaded with 163 fuel assemblies, each about 4 metres in length and weighing 571 kilograms. Once they are in place and the reactor pressure vessel is sealed, the unit may be brought to criticality and power gradually raised to the minimum 1% level. The subsequent commissioning sequence includes raising power further and testing all the plant's systems in a range of operational conditions including a sustained full power run. This takes a period of days, meaning the power unit is likely to be handed over to its Belarusian owners for routine operation in early 2022.

Since starting up in November last year the first reactor at Ostrovets has already taken a significant role in the Belarusian electricity system, which is otherwise almost completely reliant on gas. Minister of Energy Viktor Karankevich said at a press conference this week that Ostrovets 1 generates 22% of the country's electricity, displacing 1.6 billion cubic metres of gas. Ostravets 2 therefore stands to double this achievement in energy security and decarbonisation. Karankevich said Belarus had upgraded substations and high-voltage power lines to make sure energy from Ostravets reaches every part of the country.

Furthering its nuclear cooperation with Russia, Belarus is now developing a framework agreement to support Ostrovets through its 60-year design life and potentially beyond. Karankevich said there would be cooperation in the management of used reactor fuel, noting that "the first steps" towards this include an intergovernmental agreement on transport of nuclear materials that was concluded in November. Belarus will also integrate its electricity market with Russia's from 1 January 2024, he said.

Subsidies in Belarus are encouraging a transition from combustible fuels to electricity for heating, hot water supply and food preparation in homes. By the end of this year the country expects its rate of electricity consumption to have grown by 5.6% compared to 2020.