The seaside towns of Lubiatowo and Kopalino in Poland's Choczewo municipality have been named as the preferred location for the country's first large nuclear power plant. 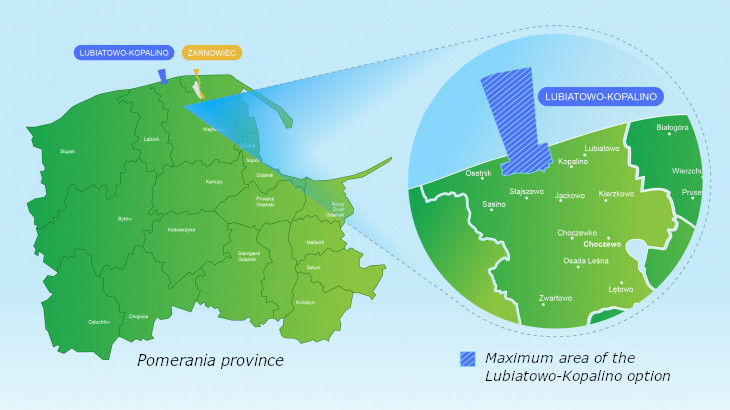 Lubiatowo-Kopalinio is a coastal location whereas Żarnowiec is lakeside (Image: PEJ)

The choice was announced by Polskie Elektrownie Jadrowe (PEJ), the government company that is progressing its policy to deploy up to six reactors at multiple sites by 2040.

PEJ said very detailed environmental and location studies have been conducted on the area since 2017, with the support of Jacobs as a technical advisor. Potential nuclear energy development in Choczewo has been a subject of public discussion since Poland's programme began in 2011. A nationwide effort to raise awareness of nuclear energy has seen three local information centres established in the area, among other efforts. The goal was to "enable everyone to form their own opinion."

The "substantive" work on an environmental impact assessment has been completed, PEJ said when announcing the siting preference. It noted that national and European legislation has evolved over the course of the study and this needs to be reflected in the final report. "Therefore, the report will be completed and submitted to the General Director of Environmental Protection in the first quarter of next year, after the amended regulations enter into force," it said.

The study began with 92 potential sites, said PEJ. They were assessed on "factors such as land characteristics, cooling water availability, location in relation to areas covered by forms of nature protection, including Natura 2000 sites, and existing and expandable infrastructure elements, such as energy, road and rail networks." (Natura 2000 is a coordinated network of protected habitat areas stretching across the EU.)

"We want the entire investment process in the project of the first nuclear power plant in Poland to be transparent, responsible and to the highest standards from the very beginning," said Tomasz Stępień, chair of PEJ. The "long-term and comprehensive analysis" of locations where the power plant could be built has been a priority for the company in recent years, he added.

PEJ noted a recent opinion poll that showed 74% support for construction of nuclear power plants in Poland as well as 63% support among residents of Choczewo, Gniewino and Korkowa to build nuclear facilities in Pomerania province.