The first full assemblies of a new kind of nuclear fuel have been loaded into Russia's Balakovo 1 for a five-year trial. Rosatom's REMIX fuel promises to close the fuel cycle using today's light-water reactors. 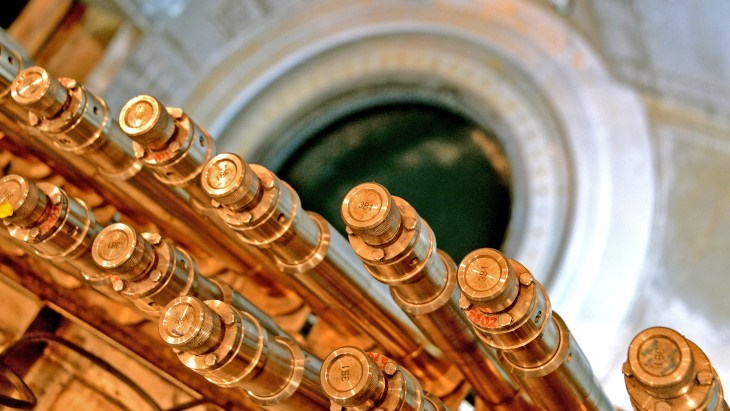 Fuel assemblies ready to be loaded into Balakovo 1 (Image: Rosatom)

The trial is the latest in the development of REMIX and should give Russia's state nuclear company Rosatom the information it needs to license and commercialise the fuel. Six full REMIX assemblies were loaded into the Balakovo 1 VVER-1000 reactor where they will stay for three 18-month operating cycles, lasting about five calendar years.

Doing this will provide more information about REMIX fuel behaviour in the reactor core and its influence on reactor physics, said Alexander Ugryumov, vice president for research, development and quality at Rosatom's fuel subsidiary TVEL. "Thus, we would obtain the necessary data for licensing full refuelling of the core with REMIX assemblies, as well as a reference experience for commercialisation and introduction of such fuel."

The test follows a trial at Balakovo using TVS assemblies that contained just a few rods of REMIX fuel and concluded in September after five years. That was considered a success and the assemblies are currently cooling until they can be examined in detail.

TVEL made the REMIX fuel pellets at the Zheleznogorsk Mining and Chemical Combine and manufactured the fuel assemblies at the Siberian Chemical Combine in Seversk to the same external specifications as the TVS fuel usually used in VVER-440s. However, instead of conventional enriched uranium fuel pellets, they contain pellets of a mixture of enriched uranium with recycled uranium and plutonium recovered from previously used fuel. The pellets are made at the Siberian Chemical Combine in Seversk, where Russia has a large storage facility for used reactor fuel.

The REMIX fuel cycle would see used fuel assemblies reprocessed so that uranium and plutonium can be recycled as an unseparated mixture. They are topped up with some freshly enriched uranium and made into new fuel, which goes back to be used again. This cycle can be repeated as many as five times, with waste fission products removed each time and vitrified in glass ready for permanent geological disposal. In theory, a new reactor could circulate three REMIX fuel loads for its whole design life of 60 years.