Finnish radioactive waste management company Posiva Oy has submitted its application for an operating licence for the used fuel encapsulation plant and final disposal facility currently under construction at Olkiluoto. The repository - the first in the world for used fuel - is expected to begin operations in the mid-2020s. 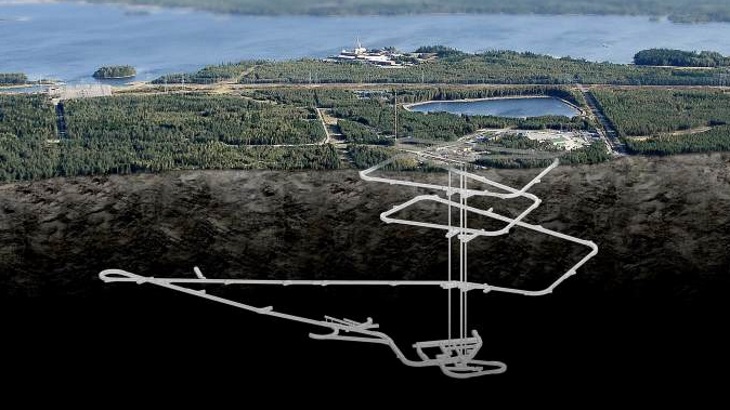 A rendering of the underground used fuel repository at Olkiluoto (Image: Posiva)

Posiva submitted the application to the Ministry of Economic Affairs and Employment (TEM) on 30 December. The company is applying for an operating licence for a period from March 2024 to the end of 2070.

Posiva's plan is for used fuel to be packed inside copper-steel canisters at an above-ground encapsulation plant, construction of which began in September 2019 and is scheduled to be completed in mid-2022. The fuel will then be placed in the bedrock, at a depth of 400-430 metres. The disposal system consists of a tightly sealed iron-copper canister, a bentonite buffer enclosing the canister, a tunnel backfilling material made of swellable clay, the seal structures of the tunnels and premises, and the enclosing rock.

According to the application, most of the used fuel of Posiva's owners - Teollisuuden Voima Oyj (TVO) and Fortum Power & Heat Oy - would be disposed of in the facility between 2024 and 2070. The disposal of all the used nuclear fuel of TVO and Fortum is expected to be completed by the late-2120s according to current nuclear power operation plans.

The ministry said it will organise a public consultation regarding the licence application at a later date. TEM will then request statements from several authorities, organisations and municipalities in the affected area, and provide citizens and communities with an opportunity to express their opinions. These statements and opinions, it said, will be considered when the operating licence application is processed.

"The safety case compiled for Posiva's application for the operating licence is the outcome of more than 40 years of research and demonstrates the safety of final disposal," said Tiina Jalonen, Posiva's senior vice president of development. "The review procedure of the operating licence application is estimated to proceed so that Posiva will be in a position to start the final disposal operation in mid-2020s."

The site for Posiva's repository was selected in 2000. The Finnish parliament approved the decision-in-principle on the repository project the following year. Posiva submitted its construction licence application to the Ministry of Employment and the Economy in December 2013. The company studied the rock at Olkiluoto and prepared its licence application using results from the Onkalo underground laboratory, which is being expanded to form the basis of the repository.

The government granted a construction licence for the project in November 2015 and construction work on the repository started in December 2016.

The Onkalo geological repository will be the first in the world for used nuclear fuel. A similar repository is planned at Forsmark in Sweden.

"The work carried out for several decades to demonstrate long-term safety and develop the final disposal facility concept Onkalo to suit the conditions of Olkiluoto has now been finalised and we can concentrate on the installation of equipment in the encapsulation plant and the final disposal repository, commissioning of the facility and preparations for operational activities," said Posiva CEO and President Janne Mokka.