Electricity generation has ended at Scotland’s Hunterston B power station with the shutting down of Reactor 4, an advanced gas-cooled reactor (AGR). Operator EDF says the power station produced enough electricity during its lifetime to power every home in Scotland for nearly 31 years. 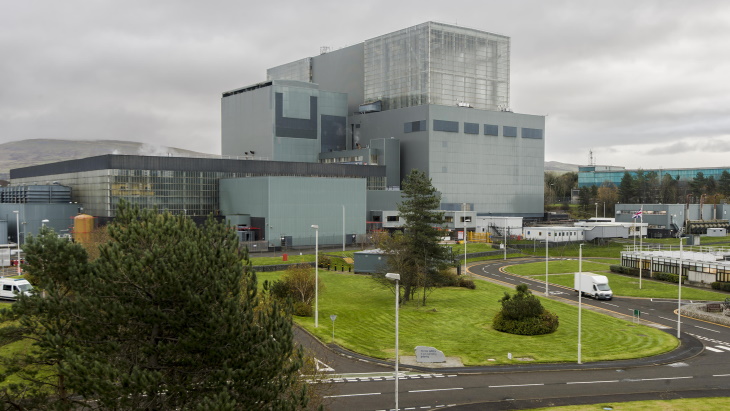 The Hunterston B plant (Image: EDF)

The plant, which came online for the first time in February 1976, was initially expected to run for 25 years but had its generating lifespan increased to more than 45 years. The station’s other unit, Reactor 3, was taken offline in November.

“The contribution Hunterston B power station has made to this country cannot be underestimated. As well as providing stable, well paid employment for thousands of people in the North Ayrshire area, it has produced almost 300TWh of zero-carbon electricity,” said station director, Paul Forrest.

“Everyone here is proud of what the station has accomplished. We will pause to reflect the end of generation but we are looking forward to the future. We don’t just switch off the power station, close the gates and walk away. It will take time to defuel and decommission the site and we will continue to need skilled people to do this.”

Both reactors were taken offline in 2018 after cracks in their graphite cores were discovered during routine inspections. The UK’s Office for Nuclear Regulation (ONR) gave approval to restart Reactor 4 in August 2020 and Reactor 3 the following month. However they were taken offline again in 2021 for further inspections of their graphite cores, with the ONR then giving permission for them to be switched on for about six months of operation each.

The two reactors will now be prepared for defueling - where nuclear fuel is removed from the reactors and transported to Sellafield in northwest England for storage. That process is expected to take three years, with the site then due to be handed over by EDF to the UK’s Nuclear Decommissioning Authority for its subsidiary Magnox to continue with the decommissioning.

All seven of the UK’s advanced gas-cooled reactors are expected to end their operational lives this decade, meaning the UK “needs to move forward rapidly with plans for new reactor construction to expand the role of nuclear in its generation mix to meet its net-zero goals,” said Sama Bilbao y León, director general of World Nuclear Association.

"The current energy crisis, driven by sky-rocketing gas prices, shows that a reliance on imported fossil fuels is not only bad for the environment, it is also too risky for the economy. The UK needs to invest in new nuclear capacity to provide a reliable electricity supply at an affordable price," she added.

The Nuclear Industry Association - the trade association for the civil nuclear industry in the UK - says that over its lifespan, Hunterston B has saved 224 million tonnes of carbon dioxide emissions, worth GBP16.8 billion (USD22.7 billion) at current carbon prices.

The association’s Chief Executive, Tom Greatrex, said: “Hunterston B has shown the best of what nuclear can provide for Scotland - clean, reliable power to keep the lights on and save our planet, and long-term, skilled jobs, on which people can build a life and a family.”

The Hunterston A plant comprised two Magnox reactors capable of generating 180 MWe each. Hunterston A Reactor 1 began power generation in February 1964, with Reactor 2 following in June that year. Reactor 2 shut down on 31 December 1989 and Reactor 1 on 31 March 1990.