Enough cobalt-60 to sterilise 10 billion items of medical equipment was recently shipped from unit 7 at Canada's Bruce nuclear power plant. Meanwhile, a new production base for medical radioisotopes is being set up at the Qinshan Phase III nuclear power plant in China. 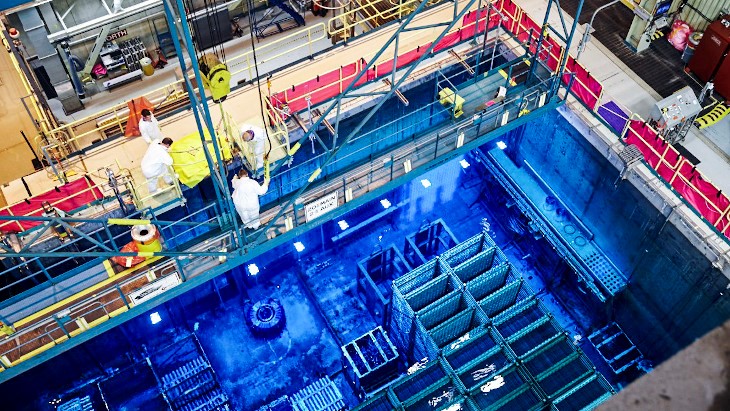 Bruce Power has announced that it has completed another harvest of cobalt-60 from Bruce 7, a Candu reactor that has generated power in Ontario since 1986.

Cobalt-60 emits gamma rays which are used to sterilise medical equipment quickly in large volumes and it is also used in hospitals for non-invasive treatments. Ontario Premier Doug Ford thanked Bruce Power "for providing this vital resource to the global medical community" and linked it to the need for medical supplies during the COVID-19 pandemic.

The cores of a Candu 6 reactor, like the ones at Bruce, feature stainless steel adjusters that optimise power output and ensure efficient burn-up of uranium fuel by shaping neutron flux. These can be replaced with copies containing naturally occurring cobalt-59 that will absorb neutron radiation to become cobalt-60 without making any difference to reactor operation.

After about five years in the reactor core, the adjusters are removed and shipped to a Nordion facility near Ottawa to be made into finished cobalt-60 sources. From there they go around the world to sterilise medical supplies, implants and some food products.

Bruce Power said its cobalt-60 would be used "to sterilise up to 10 billion pairs of surgical gloves and single-use medical devices." Cobalt-60 is also used in 600 hospitals globally, and five in Canada, for non-invasive gamma knife treatments of breast cancer and brain tumours.

Bruce Power is also working towards production of lutetium-177, which is used in the treatment of prostate cancer and neuroendocrine tumours, as well as molybdenum-99 which decays to create the technetium-99m used in a wide range of medical imaging applications.

Candu reactors at Wolsong in South Korea, Embalse in Argentina and at Qinshan-III nuclear power plant in China produce cobalt-60. The pressurised water reactor at Clinton in the US produces cobalt-60 through irradiation of a 'target' rod rich in cobalt-59 inserted into its core.

It was also announced on Monday that a new company, Zongnu Qinshan Isotope Company, was officially established to undertake the "investment, construction and follow-up operational management of the China Nuclear Qinshan isotope production base." This was announced by China National Nuclear Corporation (CNNC), which founded Zongnu through its subsidiary CNNC Operations in partnership with Haiyan State Investment Company.

CNNC said, "The first phase of the project will build a number of isotope production lines to effectively enhance the localisation capability of isotopes" without specifying which further isotopes would be produced.