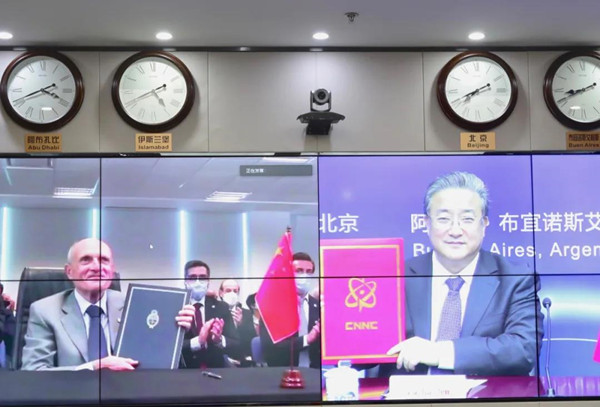 The signing of this EPC contract marking a major milestone in the nuclear energy cooperation between China and Argentina, the signing embodies the concrete steps taken by both sides to stay committed to green and low-carbon development, climate change mitigation, for the global carbon peak and carbon neutrality, and for the nuclear-energy-driven community of shared future for mankind.

Each HPR1000 unit with 1200MW in capacity generates around 10 billion kWh of clean electricity annually. The yearly generation could reduce standard coal consumption by 3.12 million tonnes, or carbon dioxide emission by 8.16 million tonnes, equivalent to a vegetation of 70 million trees.

So far, the first HPR1000 units in China and beyond, namely the Unit 5 in Fuqing Nuclear Power Plant, and Unit 2 in Karachi Nuclear Power Plant, have been operating safely and stably. Unit 6 in Fuqing was also connected to the grid for power generation. Meanwhile, mass production of HPR1000 is seen in multiple places in China such as Zhangzhou, Fujian Province, and Changjiang, Hainan Province. HPR1000 technology as the flagship of CNNC, will underpin the orderly and safe development of nuclear energy in China and the path towards carbon peak and carbon neutrality.