Twin robots practice rescuing each other in fusion machine

Two identical remotely-operated manipulators used to maintain the Joint European Torus (JET) fusion energy machine at the Culham Science Centre in Oxfordshire, UK, are being tested in a series of practice 'rescue missions', where each saves its stranded twin. 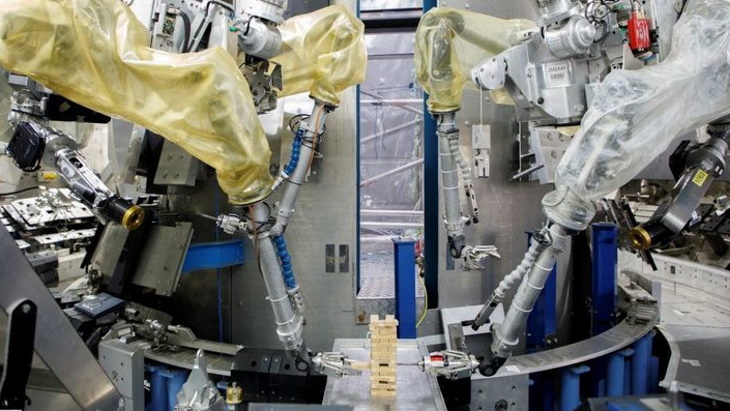 Engineers competed in a game of Jenga using the MASCOT manipulators to hone their skills (Image: IAEA)

Each MASCOT manipulator has two arms with grippers haptic feedback that can operate more than 900 bespoke tools. The MASCOTs are each deployed into JET - or its replica training vessel - on the end of an articulated 12-metre boom, driven by UK Atomic Energy Authority's (UKAEA's) remote handling team from a control room fitted out with live camera feeds and virtual reality screens for additional precision views. Skilled operators use two robot arms to control each MASCOT as it performs tasks including replacing tiles, welding, cutting, dust collecting and surveying to maintain JET.

In a GBP1.5 million (USD1.8 million), 32-month project - funded by the EUROfusion programme - more than 40 engineers at UKAEA's Remote Applications in Challenging Environments (RACE) robotics laboratory are working to support future science experiments on fusion energy machines including JET and its successor, ITER, in the south of France, along with fusion power plants.

As part of the project, the MASCOT manipulators are being used to carry out practice 'rescue missions' of each other.

"The development of 'self-recovering' robots to go where humans can't, is key to making fusion energy a safe, sustainable, low-carbon energy source for generations to come," UKAEA said.

"Robotic systems are an integral part of putting fusion energy on the grid for the design and maintenance of future fusion power plants," said UKAEA Remote Handling Lead Technologist Gary Hermon. "We can't afford to have a robot that gets stuck.

"The second MASCOT is now in place to train our remote handling team in rescue tasks ensuring its twin can always be saved when working on the maintenance of JET, our machine where EUROfusion researchers set a sustained fusion energy record announced earlier this year."

According to UKAEA, JET is the currently the only fusion energy machine in the world that uses remote handling and robotics for maintenance, placing the UK at the forefront of this technology and expertise.

UKAEA conducts fusion energy research on behalf of the UK government. It oversees the UK's fusion programme, headed by the MAST Upgrade (Mega Amp Spherical Tokamak) experiment. It also hosts the world's largest and most powerful operational tokamak machine, JET, which it operates for scientists from around Europe. Temperatures in JET can reach levels 10 times hotter than the centre of the sun.

In February, researchers at JET doubled the previous record, set in 1997, by producing a total of 59 megajoules of heat energy from fusion over a five second period.

The work at JET is seen as a "vital test bed" for ITER and future fusion power plants which plan to use the same deuterium-tritium fuel mix and operate under similar conditions.