Base plate for BREST reactor delivered to site

The steel base plate for the BREST-OD-300 lead-cooled fast reactor has been delivered to the construction site at the Siberian Chemical Combine's Seversk facility in Russia's Tomsk Region. The circular component was delivered in two halves, which will be assembled into a single structure before installation. 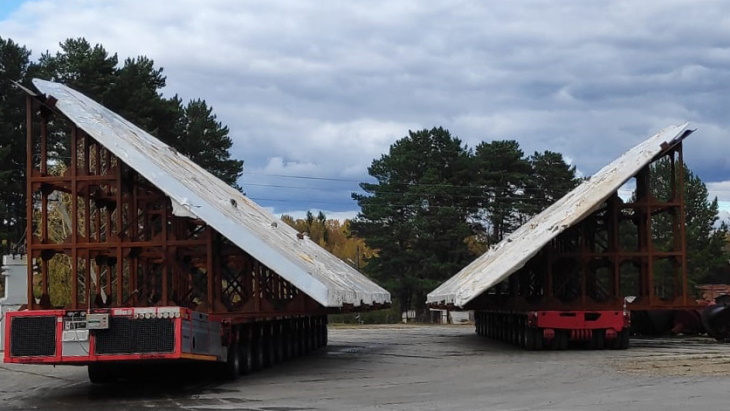 The two halves of the base plate at the construction site (Image: TVEL)

The base plate is a welded metal structure with a diameter of more than 21 metres and a wall thickness of 300mm. The total weight of the slab is 176 tonnes.

The two sections of the base plate were delivered to the harbour of the village of Samus along the Northern Sea Route, with intermediate reloading from an ocean-class barge to a river-class barge in the Gulf of Ob, Russian state nuclear corporation Rosatom subsidiary TVEL said.

Once assembled, the plate will be installed in the shaft of the BREST-OD-300 reactor building. Its main function is to equalise the loads on the foundation from the elements of the reactor vessel. The pouring of concrete for the foundation slab was completed in August 2021.

BREST-OD-300 is part of Rosatom's Proryv, or Breakthrough, project to enable a closed nuclear fuel cycle. The 300 MWe unit will be the main facility of the Pilot Demonstration Energy Complex, which is in the process of construction at the SCC site. In addition, the complex will demonstrate an on-site closed nuclear fuel cycle with a facility for the fabrication/re-fabrication of mixed uranium-plutonium nitride (MNUP) nuclear fuel, as well as a used fuel reprocessing facility.

A fuel production facility and an irradiated fuel reprocessing module are scheduled to be built by 2023 and 2024, respectively, while the BREST-OD-300 reactor is expected to start operation in 2026.