Dome hoisted into place at Taipingling 2

China General Nuclear (CGN) has successfully completed the hoisting of the 225-tonne dome into place on the second unit at Taipingling nuclear power plant, in Huizhou in south China's Guangdong province. 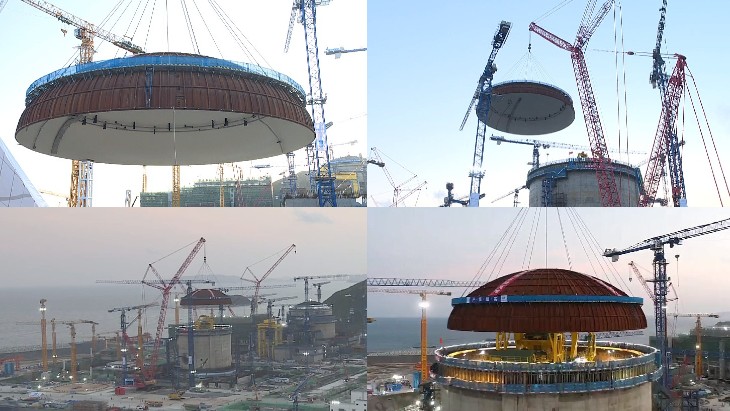 The entire operation on Sunday was live-streamed as the dome was hoisted to a height of 70 metres before being put in place at 19:00 local time.

The dome is designed to ensure the integrity and airtightness of the reactor building and the company said it marked the project's move from the civil construction stage to the equipment installation phase.

The Taipingling plant will eventually have six Hualong One reactors. The construction of the first and second units began in 2019 and 2020 respectively.

Yan Shaohua, deputy general manager of CGN's Huizhou Nuclear Power Company, was reported by China News Network as saying dozens of drills had been carried out in advance and the team had "used intelligent nuclear power construction technologies such as Building Information Modeling to perform animation simulations on the hoisting process control, find hoisting difficulties in advance and formulate solutions to ensure … a successful hoisting."