China's first high intensity proton cyclotron based Boron Neutron Capture Therapy (BNCT) facility made a major breakthrough on Nov 25: for the first time in the world, it realized a 14MeV/1mA proton beam irradiating a beryllium target to produce epithermal neutrons, and completed the joint test of the neutron source based on the 14MeV high intensity cyclotron.

The whole set of equipment, developed by the China Institute of Atomic Energy (CIAE) of the China National Nuclear Corporation (CNNC), was in good working condition during the test, with the accelerator-based neutron source meeting the design’s expectations. This marks the CIAE having overcome all the key technologies of the BNCT facility, from the accelerator, to the neutron target and moderator, with the main devices used being 100% domestically made. This shows that the CIAE has the ability to design and build BNCT commercial machines, laying a solid foundation for the construction of a clinical demonstration center and the industrialization of the BNCT facility. 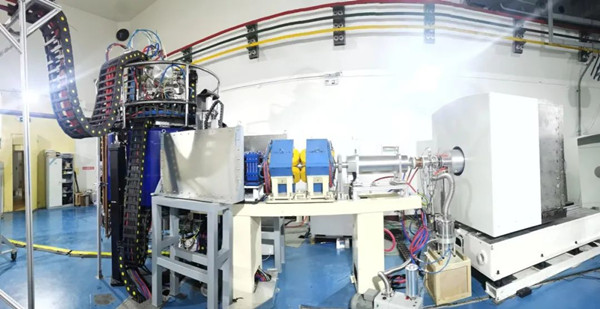 The BNCT is one of the most cutting-edge cancer targeted therapy technologies in tumor treatment in the world, and is often used in the treatment of head and neck tumors, and melanoma. The BNCT facility of the CIAE, with fully independent property rights, can be used not only for cancer treatment, but also for the production of radioisotope drugs, and in the early diagnosis of cancer, cardiovascular and cerebrovascular diseases. It is also expected to form an industrial scale in high-end medical equipment, reducing the cost of treatment, and bringing the benefits of nuclear science and technology to more people.